South Africa's parliament on Thursday chose Cyril Ramaphosa, an anti-apartheid activist who became a wealthy businessman, to be president after Jacob Zuma, tarred by scandal, was forced from office.

Here is a timeline of events behind the dramatic change of power:

Ramaphosa bowed out of politics in 1999 after he failed to succeed Nelson Mandela, the first post-apartheid leader.

He entered business, where he made a fortune, before returning to the political fray in 2012 and became deputy president in 2014.

In December 2017, the ruling African National Congress (ANC) held elections for the party presidency -- a stepping stone to becoming the nation's head of state, which is chosen by parliament.

Zuma's critics accused him of seeking to install his former spouse to shield himself from prosecution after leaving the national presidency.

Amid concern that the ANC could be mauled in elections due in 2019, Ramaphosa mounted a successful campaign on a manifesto to boost the economy, provide jobs and fight the graft that Zuma was accused of fostering.

Behind the scenes, pressure from the ANC was intensifying for Zuma to step down.

On February 4, the ANC's "Top Six" officials, including Ramaphosa, approached Zuma at his home and urged him to resign. He refused to budge.

On February 6, the president's much-anticipated yearly state of the nation speech to parliament -- typically half policy address and half political theatre -- was postponed as the tense stand-off escalated.

The same day, Zuma met Ramaphosa for one-on-one talks, which were described as "productive".

But local media reported that the situation was deadlocked. Zuma was reportedly trying to negotiate immunity from prosecution for himself and his family -- alongside assurances that his mounting legal bills would be guaranteed.

The crisis began to come to a head last Sunday, when thousands of ANC supporters gathered in Cape Town for a rally to commemorate Mandela.

Ramaphosa told the crowd that "we know you want this matter to be finalised" and repeated his goal of rooting out corruption in government and the party.

On Monday, the ANC's top decision-making body met again while Zuma continued to stall, seeking to cling to power for another three months.

In the early hours of Tuesday, the meeting agreed to "recall" the president from office -- an order effectively sacking him from the job as the ANC's chosen head of state. 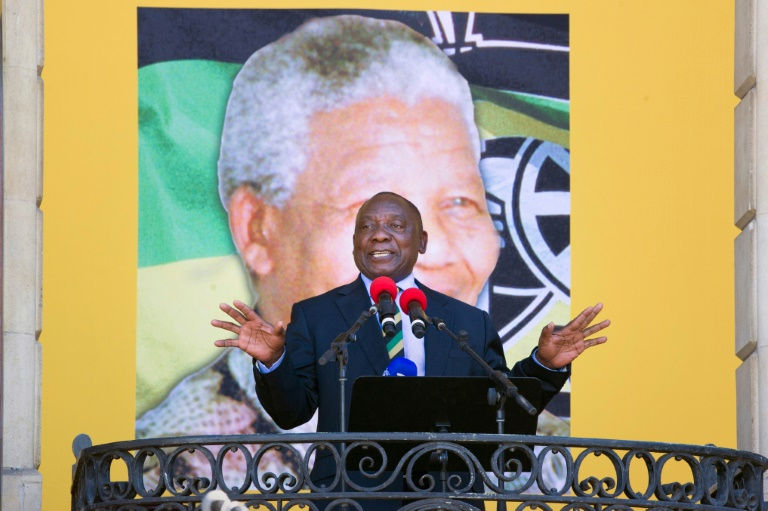 The crisis began to crest to a climax last Sunday, when Ramaphosa -- at a rally to mark Nelson Mandela -- pledged to end 'disunity and discord'

On Wednesday, facing the threat of a vote of no confidence in parliament, Zuma said treatment of him had been "very unfair."

"There is no evidence of if I have done anything wrong," he added in an unannounced long interview.

Hours later, in TV address, Zuma said he had "come to the decision to resign as president of the republic with immediate effect".

On Thursday, Ramaphosa, the only candidate for the presidency, was approved by parliament to be his successor.