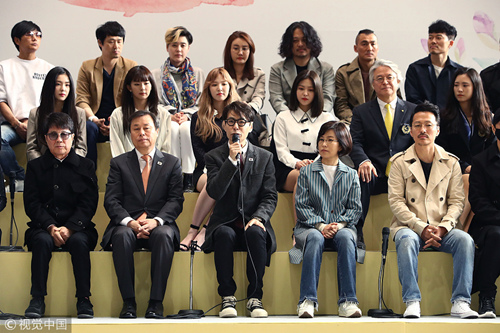 A South Korean art troupe arrived in Pyongyang Saturday ahead of the historical inter-Korea summit in April. The 120-member group, which is led by South Korean Culture Minister Do Jong-whan, will perform a concert in Pyongyang Sunday and Tuesday under the title "Spring is Coming".

The musicians including some of the most famous singers in South Korea left Seoul's Gimpo International Airport at 10:30 am Saturday and arrived in North Korea one hour later via a direct air route between Seoul and Pyongyang over the Yellow Sea, according to Yonhap News Agency.

The performance on Tuesday will be joined by North Korean artists.

"This performance in Pyongyang will add momentum to inter-Korean exchanges and cooperation that resumed with the Pyeongchang Winter Olympics in the South", said Do Jong-hwan, who will meet North Korean officials to discuss cultural and sports cooperation between the two Koreas that have restarted after a decade-long hiatus.