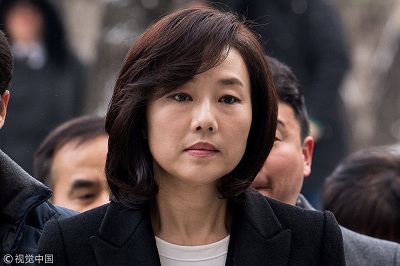 A South Korean appeals court on Tuesday jailed former culture minister Cho Yoon-sun for two years for her role in drawing up a blacklist of 10,000 artists seen as critical of ousted president Park Geun-hye's government.

Cho had initially been acquitted in July and given only a suspended sentence on a minor related charge, prompting prosecutors to appeal.

The higher court in Seoul also extended the prison term of Park's ex-chief of staff Kim Ki-choon from three years to four.

Before becoming the culture minister in 2016 Cho was a policy advisor to Park, and the court said it was "reasonable" to believe she had collaborated in "attempts to stop state supports for certain artists".

Cho, who had been on bail, was immediately arrested in the courtroom.

The blacklist, whose existence emerged in 2016, was aimed at starving artists of state subsidies and private funding and placing them under state surveillance.

Many had voiced support for opposition parties, or had criticized Park and her policies or her late dictator father Park Chung-hee.

The list, including artists in film, theatre, dance, music, fine arts and literature, reads like a Who's Who of Seoul's art scene.

It includes novelist Han Kang, winner of the 2016 Man Booker International Prize, and film director Park Chan-wook, whose "Oldboy" took the Grand Prix at Cannes in 2004.

Park was impeached last year over a major corruption and influence-peddling scandal that rocked the nation, and is currently on trial.