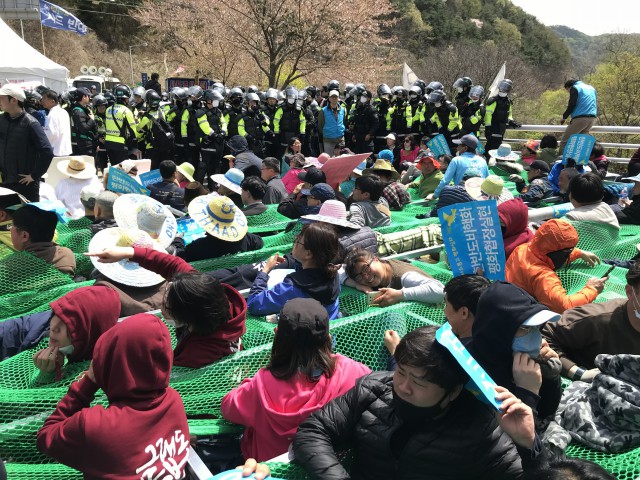 Huandreds of protesters and local residents near the THAAD missile defense base in Sejongju, North Gyeongsang Province, clash with police on April 12, 2018, protesting against the transport of construction materials and equipment to the area. (Photos provided by Sejongju residents)

The military had planned to transport construction materials to the site within the day.

Police clashed with hundreds of activists and residents, trying to clear the way for the trucks. Some protesters were injured. Residents and police previously clashed in Soseong village during the delivery of two THAAD launchers on Apr. 26 and another four launchers on Sept. 7 last year.

The Ministry of National Defense reached a deal with protesters to continue talks through the weekend. The government then pulled the police out of the area.

The two sides agreed to let 12 trailers onto the site to take such heavy equipment as forklifts and bulldozers out of it. Those were used for early-stage construction work a few months ago.

“Although the ministry agreed to suspend the hauling of construction materials and equipment, I cannot imagine what will happen next month,”a local resident said. 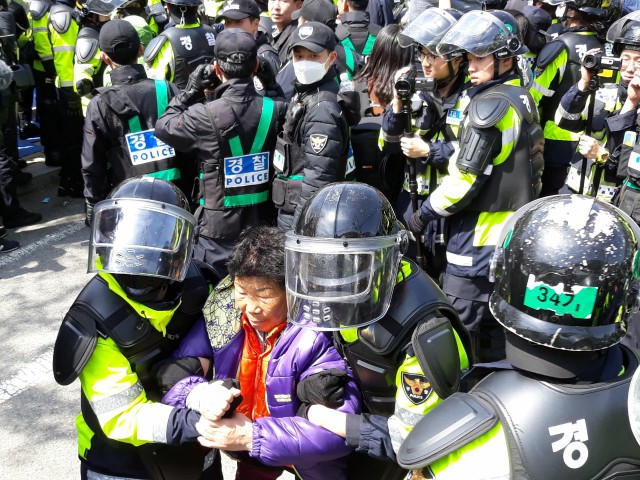 Last year, the US installed six THAAD launchers at the site, along with a powerful X-band radar station and a fire control and communications unit, in a bid to counter North Korea's missiles and nuclear threats. The THAAD battery was immediately put into operation.

The two sides are set to continue negotiations.