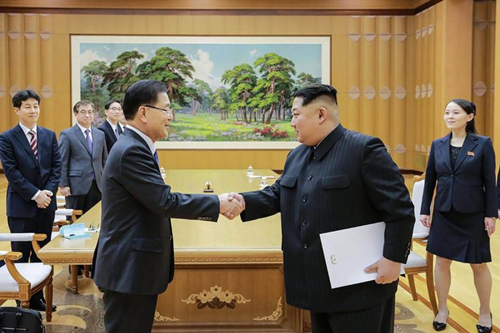 SEOUL, March 16 - South Korea will seek to hold high-level talks with the Democratic People's Republic of Korea (DPRK) later this month to prepare for the agreed inter-Korean summit, the Blue House said Friday.

Im Jong-seok, chief of staff for South Korean President Moon Jae-in, told a press briefing that the Moon government will push for a senior-level dialogue with the DPRK in late March for the inter-Korean summit agreed to be held in late April.

South Korea planned to officially propose to the DPRK holding the talks, Im said after convening the first meeting of the presidential committee to prepare for the summit between President Moon and the DPRK top leader Kim Jong Un.

For the fundamental resolution, he said the committee will make preparations for the summit focusing on issues to denuclearize the Korean Peninsula, dramatically defuse military tensions, build a permanent peace and advance new inter-Korean relations.

Aside from the preparation committee of the Blue House, a separate advisory group, composed of 30 to 40 members, will be formed to collection a wide range of public opinion and share the experiences of former government officials who had prepared for the past inter-Korean summits in 2000 and 2007, Im said.

Meanwhile, South Korea will seek to send its art troupe and demonstration team of Taekwondo, a traditional Korean martial art, to Pyongyang in early April as agreed upon.

Special envoys of President Moon visited Pyongyang earlier this month and met the DPRK leader, delivering Moon's message to him.

Moon and Kim have agreed to hold their first meeting in late April at Peace House, a South Korean building in the truce village of Panmunjom that straddles the two Koreas.

In addition to the summit, South Korea agreed to dispatch its artists and Taekwondo demonstrators to Pyongyang in return for the DPRK's dispatch of its art troupe and demonstration team to the 23rd Winter Olympics hosted by South Korea's Pyeongchang county in February.

The South Korean delegation of artists and Taekwondo demonstrators will be headed by Minister of Culture, Sports and Tourism Do Jong-hwan.

The two Koreas will hold working-level talks in Panmunjom next week to discuss South Korea's dispatch of its artists and demonstrators to Pyongyang next month, Im added.