HEADLINE S.Korea will never allow US military action against DPRK without consent: Moon

S.Korea will never allow US military action against DPRK without consent: Moon 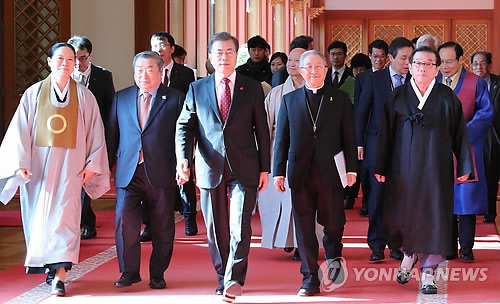 "Tensions between the South and the North are at their peak, so it is a very delicate situation, as if we are walking on thin ice," Moon said while meeting with the leaders of seven leading religious orders, including Buddhism, Protestantism and Catholicism.

"But a peaceful solution is still possible,” Moon said. “War or violence must not be allowed.”

Moon's remarks come a week after Pyongyang launched an apparent intercontinental ballistic missile in its first military provocation in over two months.

"But I am not all pessimistic. I believe a crisis may well turn into an opportunity, and the night is the darkest just before the dawn. The Winter Olympics in Pyeongchang might be an opportunity to dramatically improve South-North relations," Moon said.

Moon added that religious and non-government exchanges could help as the channels of official dialogues have been blocked. “If North Korea could attend the 2018 Winter Olympics, then an political dialogue could be accomplished between its host city Gangwon-do and Pyongyang,”  Moon noted.