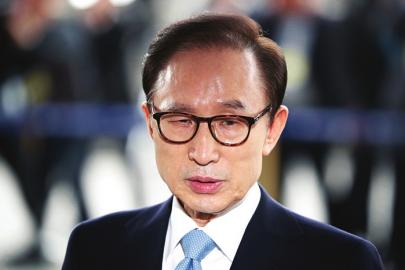 Lee is set to be taken to a Seoul detention center, becoming the nation's fourth former president to be arrested for corruption.

The 77-year-old former conservative leader faces at least 12 charges, including taking more than 11 billion won (US$10.2 million) in bribes from the state spy agency and businesses.

He is also suspected of embezzling about 35 billion won from a company, which he is said to secretly owns, and of evading related taxes.

Other charges include abuse of power, breach of trust, illegally stashing presidential documents and a violation of election law.

If convicted of everything, he could face up to 45 years in prison.

Lee was president from 2008 to early 2013. Previously he served as Seoul mayor, a lawmaker and chief executive of Hyundai Engineering and Construction.

The prosecution requested the warrant Monday after a five-month probe into his relatives and aides. Lee himself was interrogated for more than 15 hours on March 14 and 15.

He has denied all charges and claimed no knowledge of the alleged crimes. He called the investigation "political revenge" by the liberal Moon Jae-in administration.

Moon has been carrying out a sweeping anti-corruption drive since he took office in May last year following former President Park Geun-hye's ousting over a massive graft and influence-peddling scandal.

Lee's detention comes about one year after the arrest of Park, his successor.

This is the second time South Korea has seen two former presidents behind bars at the same.

Chun Doo-hwan and Roh Tae-woo, who seized power through a 1979 military coup, were imprisoned for mutiny and corruption in 1995. They were released through a presidential pardon in 1997.

Late President Roh Moo-hyun was also investigated for alleged corruption involving his family in 2009 while Lee was in office. He killed himself while the probe was ongoing in May of that year.