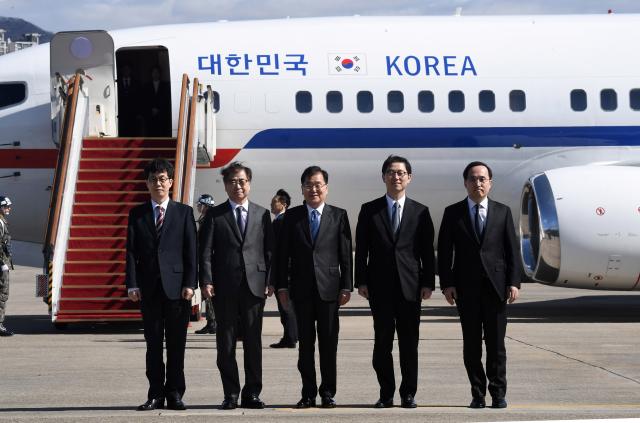 A special plane carrying South Korean President Moon Jae-in's special envoys left for Pyongyang Monday on a mission to mediate talks between the United States and the Democratic People's Republic of Korea (DPRK).

The plane carrying the 10-member special delegation took off from an airport in Seongnam, outside of the capital Seoul, at about 2 p.m. local time (0500 GMT), local TV footage showed. The passenger jet, called Air Force Two, will fly via a western direct route to the Sunan International Airport in Pyongyang.
The delegation, composed of five emissaries and five working-level officials, was led by Chung Eui-yong, top national security adviser for President Moon and head of the National Security Office of the Blue House.
Also included in the delegation were Suh Hoon, director of the National Intelligence Service (NIS), the country's spy agency, Vice Unification Minister Chun Hae-sung, Second Deputy NIS Director Kim Sang-gyun and Yun Kun-young, a senior Blue House official.
Before leaving for Pyongyang, Chung told reporters that he will convey to the DPRK side President Moon's firm will and resolution to denuclearize the Korean Peninsula and build a genuine, lasting peace on the peninsula.
The chief delegate said the emissaries will make an in-depth discussion on ways to continue a variety of dialogues between the DPRK and the international community, including the United States, as well as inter-Korean talks.
The Blue House indicated that the delegation's key mission was to broker talks between Pyongyang and Washington.
During their two-day trip, the South Korean envoys will hold talks with senior DPRK officials about issues, especially the conditions to be created for any U.S.-DPRK dialogue to denuclearize the peninsula, the Blue House said Sunday.
Baik Tae-hyun, unification ministry spokesman, told a press briefing Monday that the delegation's main focus is to encourage the start of the DPRK-U.S. talks to advance the denuclearized peninsula.
After returning to Seoul Tuesday afternoon, the envoys will brief President Moon on their DPRK trip, and then will visit Washington to explain to the U.S. side about the outcome of talks between the South Korean envoys and the DPRK officials.
Chung and Suh reportedly planned to visit Washington within this week to discuss the possible start of talks between Pyongyang and Washington.
Local media speculated that the South Korean delegation would meet top DPRK leader Kim Jong Un to deliver the letter of President Moon, but the Blue House had yet to confirm it.
Moon met with the high-ranking DPRK delegations, who came here last month to attend the opening and closing ceremonies of the 23rd Winter Olympics.
During the meeting with Moon in Seoul, Kim Yo Jong, the younger sister of the DPRK leader, delivered her brother's letter to Moon, conveying the DPRK leader's invitation to the South Korean leader to visit Pyongyang.