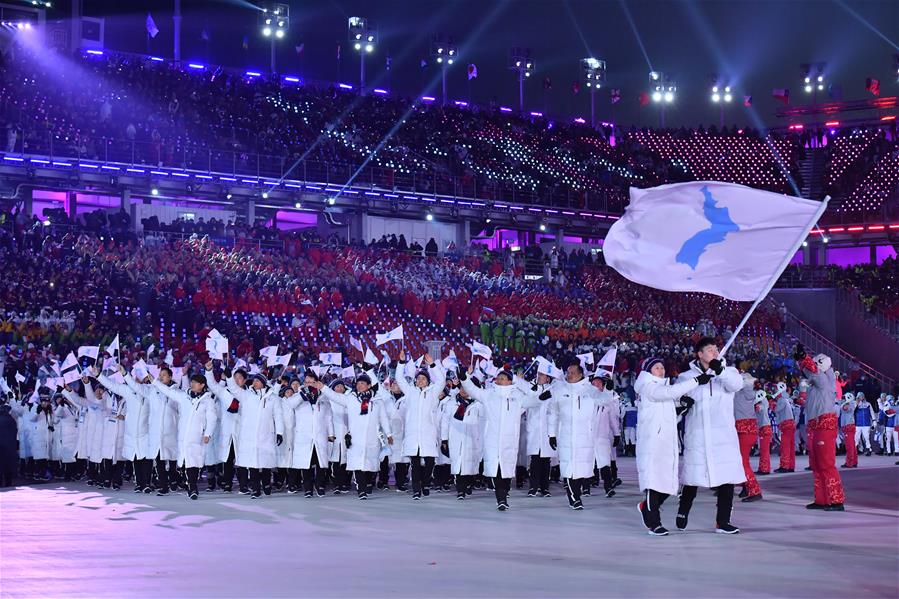 Athletes from South Korea and the Democratic People's Republic of Korea (DPRK) marched together under a unified Korean flag at the opening ceremony of the 23rd Winter Olympics in South Korea's eastern county of PyeongChang on Friday. Dressed in long, white padded jackets, they followed the flag with a blue silhouette of the Korean Peninsula against a white background. The athletes also held smaller unified flags aloft in their right hand, waving them and smiling in front of thousands of spectators. The spectators included South Korean President Moon Jae-in, Kim Yong Nam, president of the Presidium of the DPRK Supreme People's Assembly, and Kim Yo Jong, the younger sister of DPRK's top leader Kim Jong Un. It marked the first time in 11 years that athletes from the two Koreas walked under a unified flag at the opening ceremony of an international sports event. The first time it had happened was at the opening ceremony of the Sydney Summer Olympics in 2000. Since then, scenes of reconciliation between the two countries were seen under liberal South Korean presidents at the time, Kim Dae-jung and Roh Moo-hyun. But such scenes disappeared over the past decade under the conservative governments of South Korea. The PyeongChang Winter Olympics marked the 10th marching together of athletes from the two Koreas under a unified flag at the opening ceremonies of international sports competitions. A high-ranking DPRK delegation arrived in South Korea earlier in the day to attend the opening ceremony. It also includes Choe Hwi, chairman of the National Sports Guidance Committee, and Ri Son Gwon, chairman of the Committee for the Peaceful Reunification of the Fatherland. The four senior DPRK delegates will have a meeting and lunch with President Moon on Saturday, according to South Korea's presidential Blue House.