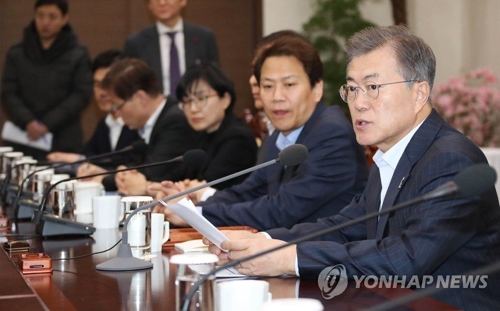 "Regarding unfair trade protectionist actions, (the government) should take confident and resolute measures, such as the filing (of a complaint) with the World Trade Organization (WTO) and the review over whether (the U.S. action) violates the (South) Korea-U.S. free trade agreement (FTA)," Moon said.

Moon made the remarks during a weekly meeting with his senior secretaries, according to the Blue House.

He also instructed officials to actively point out the unfairness of the U.S. safeguards against South Korean products in negotiations with the United States to revise the South Korea-U.S. free trade pact.

The bilateral FTA, which took effect in 2012, has been under negotiations to amend as U.S. President Donald Trump called it a "horrible" deal.

The U.S. administration decided on Jan. 23 to slap safeguards against washing machines and solar cell imports from countries, including South Korea, by levying high import tariffs on them.

Moon's order of active response to the U.S. protectionist moves indicated his two-track approach to the trade issue by separating it from security issues involving the Democratic People's Republic of Korea (DPRK).

A high-ranking DPRK delegation, including Kim Yo Jong, the younger sister of top DPRK leader Kim Jong Un, came to South Korea earlier this month to attend the opening ceremony of the ongoing Winter Olympics held in the east county of PyeongChang.

During the meeting with Moon, the younger Kim delivered the DPRK leader's invitation to the South Korean leader to visit Pyongyang at Moon's convenient time.

Continuing to cooperate with the U.S. side for security issues on the Korean Peninsula, Moon was forecast to tackle the trade issue with the United States separately from the security one.

President Trump also hinted at a two-track approach to trade and security issues, saying last week that he will push for a "reciprocal tax" on countries, including its allies such as South Korea. Trump said the so-called allies were not allies on trade.

During the meeting with his senior aides, Moon stressed the importance for the diversification of his country's trade partners to reduce dependence on the United States in trade.

Moon told his aides that the U.S. import restrictions on South Korean exports, including steel, electronics, solar cell and washing machines, were feared to disrupt the country's export that has an international competitiveness.

South Korea's export expanded 15.8 percent in 2017, marking the fastest export growth among the world's top 10 exporting countries. The country's export ranking was raised by two notches to the sixth in the world last year.

Moon ordered a close review and a comprehensive policy package to tackle the recent moves that affect the export of South Korea, while rapidly pushing for innovative growth to improve the country's export competitiveness.