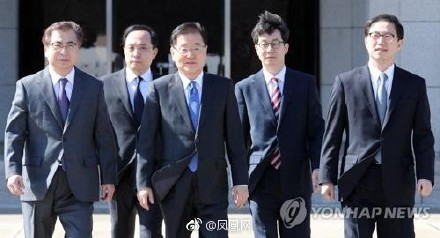 Presidential Spokesman Kim Eui-kyeom told a press briefing that the special delegation had agreed with the DPRK side to have a meeting and a dinner with the DPRK leader from 6 p.m. local time (0900 GMT) on Monday.

It was not known whether the dinner meeting had started as agreed upon.

The 10-member delegation, led by Chung Eui-yong, top national security advisor for President Moon, took off from an airport in Seongnam, outside of Seoul, at about 1:50 p.m. local time.

The plane carrying the South Korean delegation arrived in the Sunan International Airport in Pyongyang at around 2:50 p.m. local time, according to the Blue House.

The special emissaries were greeted by Ri Son Gwon, chairman of the Committee for the Peaceful Reunification of the Fatherland who visited South Korea last month as a member of high-ranking DPRK delegations to the opening and closing ceremonies of the 23rd Winter Olympics.

The South Korean envoys moved to a resort facility in Pyongyang to meet with Kim Yong Chol, vice chairman of the Central Committee of the ruling Workers' Party of Korea who led the ranking DPRK delegation to the Olympic closing ceremony.

During the meeting with the vice chairman, the South Korean envoys discussed schedules for their two-day stay in Pyongyang, agreeing to have a dinner meeting with the DPRK leader, according to the Blue House.