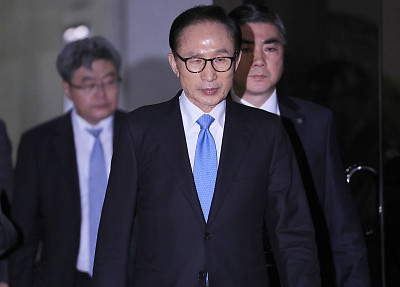 South Korean prosecutors on Monday sought an arrest warrant for former South Korean president President Lee Myung-bak, who is accused of bribery among other charges.

Lee, president from 2008 to 2013, is suspected of taking about 11 billion won ($10.3 million) in bribes from the state intelligence agency, businesses and others. He's also accused of embezzlement and abuse of power, Yonhap news reported.

If the warrant is issued, he will become the country's fourth former president to be arrested on criminal charges.

South Korean prosecutors questioned Lee for 21 hours on Wednesday and Thursday. The chief of the Seoul Central District Prosecutors' Office reported the results of the investigation to Prosecutor General Moon Moo-il on Friday.