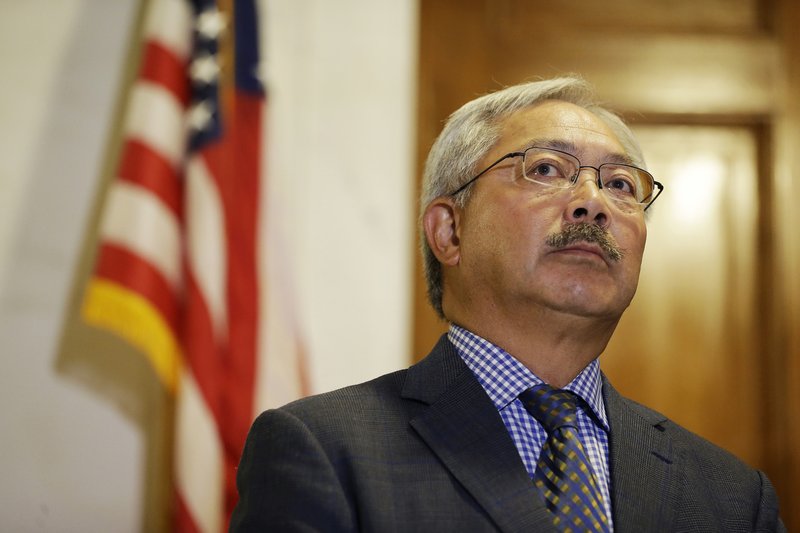 Mayor Ed Lee, who oversaw a technology-driven economic boom in San Francisco that brought with it sky-high housing prices despite his lifelong commitment to economic equality, died suddenly early Tuesday at age 65.

A statement from Lee’s office said the city’s first Asian-American mayor died at 1:11 a.m. at Zuckerberg San Francisco General Hospital. Lee was surrounded by family, friends and colleagues. No cause was given.

Lee, the child of immigrants, was a staunch supporter of San Francisco’s sanctuary city policy toward people who are in the country illegally, a stance he reiterated last month when a Mexican man who had been repeatedly deported was acquitted of murder in the 2015 killing of Kate Steinle.

The case became a flashpoint in the nation’s immigration debate, with then-candidate Donald Trump repeatedly referencing it as an example of the need for stricter immigration policies and a wall along the Mexican border. Lee shot back that San Francisco was a city of tolerance and love and acceptance.

Supervisors and other public officials were stunned and saddened by his sudden death. They praised the low-key mustachioed mayor who was better known as a former civil rights lawyer and longtime city bureaucrat than a flashy politician.

“I am floored. I can’t believe he’s gone. I just held a press conference with Mayor Lee yesterday ... He was his normal friendly and jovial self,” state Sen. Scott Wiener told KTVU-TV.

“He wasn’t the flashiest guy in the world, but he worked hard and it was an honor to work with him.”

Former Mayor Willie Brown and the late political power broker Rose Pak talked Lee into filling out the rest of Gavin Newsom’s term when he was elected California’s lieutenant governor in 2010. Lee was appointed interim mayor by the Board of Supervisors in 2011 after professing no interest in taking on the job permanently.

Lee changed his mind about taking the job permanently and won a four-year term in 2011. He was re-elected in 2015.

“We won based on our political shenanigans and our political skillsets. He got elevated to our mayor-ship under our charter and got re-elected twice,” he said.

Brown said Lee will be known as the man who “stepped up and made it possible for Silicon Valley to almost relocate to our city.”

“He knew the rhythms and the workings of San Francisco at the most granular level, and dedicated decades to improving the lives of all San Franciscans,” she said in a statement.

Detractors claimed Lee catered too much to Silicon Valley, citing his brokering of a tax break in 2011 to benefit Twitter as part of a remake of the city’s downtown. When Lee took office in January 2011, Zillow reports the median home value in San Francisco was more than $656,000. Today, it is more than $1.2 million.

In 2015, he ran against a slate of little-known candidates who criticized him as doing more for tech leaders than for poor people.

Edwin Mah Lee was born May 5, 1952, in Seattle to Chinese immigrants who hailed from Toisan, a rural village in the southern province of Guangdong, China. His father was a cook and his mother a seamstress who worked hard to raise Lee and his five siblings in public housing.

“We learn modesty. We learn sacrifice. We learn to be humble from people who may have even less. But we learn how to fight and survive at the same time,” said Lee in an interview with KTVU in February 2017.

Lee graduated from Bowdoin College in 1974 and from the University of California at Berkeley law school in 1978, according to the mayor’s website. He worked as a housing activist and civil rights attorney in San Francisco before joining city government in 1989 as the city’s first investigator under the whistleblower ordinance.

He served as deputy of human relations, director of public works and city administrator before being tapped for the mayor’s job.

San Francisco Supervisor Hillary Ronen, who was elected to office last year, said she was surprised to develop a great working relationship with Lee on housing and homelessness issues. They didn’t agree on business issues.

But she said the mayor eagerly jumped into opening a new Navigation homeless center in the Mission District.

“Sometimes he wasn’t the most brilliant public speaker and he didn’t seem super comfortable in that role, but when he talked to people on the street and in the Navigation Center, it was another side of Ed Lee,” she said. “He was comfortable and natural and respectful.”

Flags were lowered at City Hall early Tuesday. The last mayor to die in office was George Moscone, who was murdered by a disgruntled former Board of Supervisors member in 1978, leading to the ascension of then-Board of Supervisors President Dianne Feinstein to mayor. Feinstein is now California’s senior U.S. senator.

Lee’s death now will likely upend the race to replace him, which had been scheduled for 2019. Former state Sen. Mark Leno, a onetime member of the Board of Supervisors and longtime political figure, has already announced his candidacy.