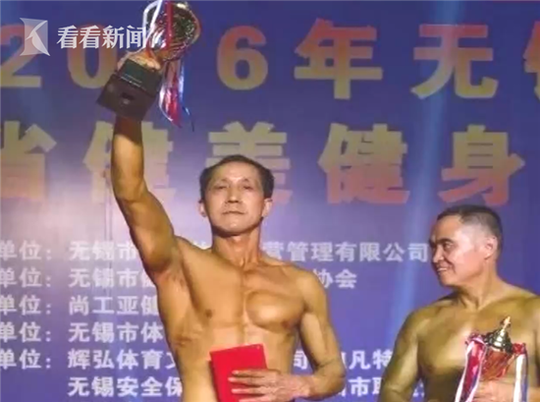 Xia Sannan is shaking up the normal sloppy image of sanitation workers everywhere after winning top honors at a recent bodybuilding competition held in Jiangsu Province, the Cover.cn reported.

Xia, a sanitation worker at the Binhu District sanitation office in the city of Wuxi, spent the last 18 years sculpting his body to physical perfection in order to accomplish his bodybuilding aspirations.

According to the Cover.cn, being a fan of Kung fu movies, Xia has long held a dream of having a muscular body like the action movie heroes of his youth.

Armed with ambition and a monthly salary of roughly 400 yuan, Xia hit the gym. Though the membership cost Xia half his monthly salary, leaving him with little to survive on, he persevered.

Xia now regularly works out, going to the gym four to five times a week in one-hour increments.

Even though Xia is a champion bodybuilder, he still works on the street every day like the rest of his colleagues. While his successful bodybuilder career has not made him rich, Xia said he is still happy and satisfied.

“I will keep doing my training,” Xia said. “It has nothing to do with ages.”