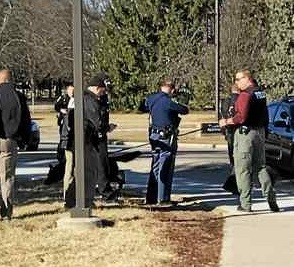 A Central Michigan University student shot and killed his parents who had arrived to pick him up for spring break Friday morning.

According to the Mercury news, multiple reports said the student had been released from the MidMichigan Medical Center – Mt. Pleasant emergency room on Pickard Road this morning, with police saying he got out just before 8 a.m.

Campus is on lockdown as the suspect is still at large.

Just before 11 a.m. searching was concentrated at Northwest Apartments and moving to the east between High and Bellows towards Mission.

Police are looking for a black man with a pistol after reports of shots being fired on campus.

Buildings on campus are in lockdown mode, as are all schools in Isabella County.

State police are sending a tactical team and helicopter to assist in the search.

Agents from the FBI are also enroute to Mt. Pleasant.

Police are working to get a photo of the suspect, believed to be 19 years old and whom they believe was released from a hospital just before 8 a.m. today, but officials said he was not at McLaren-Central Michigan.

Officials are looking for a black man with short hair, slight build, wearing yellow-colored jeans, a blue hoodie and a pistol tucked in his belt.