Senate moderates to pitch leaders on plan to end shutdown 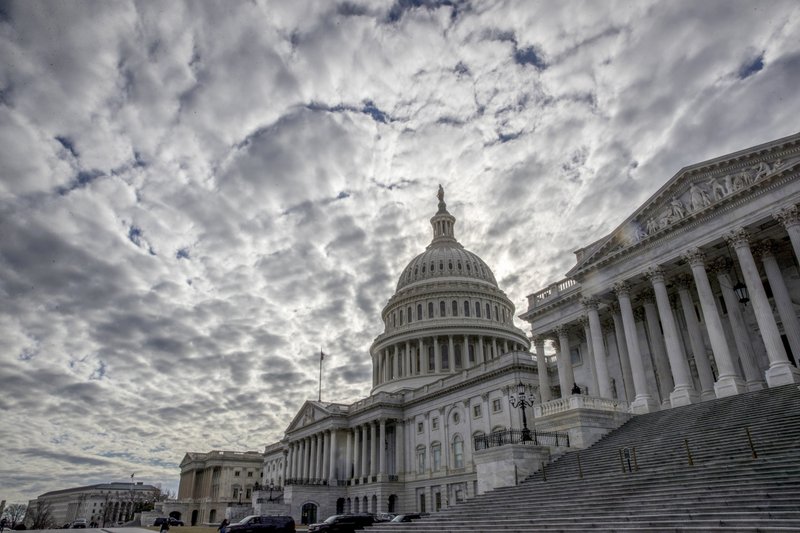 Restive Senate moderates in both parties expressed hopes of finding a way to end the government shutdown as they raced toward a late-night showdown vote and their last chance to reopen the government before hundreds of thousands of federal workers were forced to stay home from work without pay Monday.

Lawmakers on Capitol Hill said they were pursuing a deal to end the rare closure, prompted Friday by a messy tussle over immigration and spending. In exchange for Democratic votes on a three-week spending measure, GOP leadership in the Senate would agree to address immigration policy and other pressing legislative matters in the coming weeks.

Nothing has been agreed to, the lawmakers said Sunday, and there were no indications that leaders of either party or the White House was on board.

The White House and GOP leadership said they would not negotiate with Democrats on immigration until the government is reopened. A stopgap spending measure was slated for a vote on Monday after midnight, but Democrats have so far refused to go along with the temporary fix.

The contours of the new proposal were still taking shape Sunday evening. Sen. Chris Coons, D-Del., said the deal did not secure an immediate vote on immigration tied to reopening the government, but lawmakers were seeking “an agreement that we would proceed to immigration.”

The approach found advocates in South Carolina Sen. Lindsey Graham, who has been trying to broker an immigration deal, and Kentucky Sen. Rand Paul, both Republicans who rejected an earlier short-term proposal. Lawmakers took the proposal to leadership Sunday afternoon.

It was not immediately clear whether it was well-received, though the Senate’s No. 2 Republican did not appear hopeful. Asked whether he thought the government would be closed Monday, Sen. John Cornyn of Texas said, “Right now, yes, I do.”

Graham urged Democrats to take the deal. “To my Democratic friends, don’t overplay your hand,” he told reporters. “A government shutdown is not a good way to get an outcome legislatively.”

As lawmakers feuded, signs of shutdown were evident at national parks and in some federal agencies. Philadelphia’s Liberty Bell was closed, but visitors had access to other sites such as Yellowstone. The Statue of Liberty and Ellis Island would reopen for visitors Monday, with the state of New York picking up the tab for federal workers for the duration of the government shutdown.

Social Security and most other safety-net programs were unaffected by the lapse in federal spending authority. Critical government functions continued, with uniformed service members, health inspectors and law enforcement officers set to work without pay.

Lawmakers were mindful that the political stakes would soar Monday morning, when thousands of federal workers would be told to stay home or, in some cases, work without pay. What was still a weekend burst of Washington dysfunction could spiral into a broader crisis with political consequences in November’s midterm elections.

Chuck Schumer, the Senate’s top Democrat, indicated earlier Sunday that he would continue to lead a filibuster of the stopgap spending measure, while congressional Republicans appeared content to let the pressure build on the second day of the government shutdown. After Senate Democrats blocked a temporary governmentwide funding bill Friday night, both parties have engaged in furious finger-pointing.

Democrats, who initially dug in on a demand for legislation to protect about 700,000 “Dreamer” immigrants who were brought illegally to the country as children, shifted their messaging to blame the shutdown on the incompetence of President Donald Trump and Republican leadership. Republicans argued that Democrats shuttered the government over “illegal immigration” in a bid to gin up enthusiasm among their base.

“I think they miscalculated on the shutdown. It’s very unpopular, and they’re trying to find a way out of it,” Cornyn said.

Absent a breakthrough, the vote early Monday will prove to be a test of unity and resolve among Democrats. Five Democrats from states won by Trump broke ranks in a vote Friday. The measure gained 50 votes to proceed to 49 against, but 60 were needed to break a Democratic filibuster.

Trump, who regularly disrupted negotiations in recent weeks, had been a relatively subdued player in the weekend debate. He has not appeared in public since Friday afternoon. The White House said he was in regular contact with Republican leaders, but he has not reached out to any Democrats, a White House official said.

On Sunday morning, he took to Twitter to call on the GOP-controlled Senate to consider deploying the “nuclear option” — changing Senate rules to end the filibuster — and reopen the government with a simple majority.

Senate Majority Leader Mitch McConnell dismissed that option, saying Republicans will welcome the filibuster when they return to being the Senate minority.

Democrats are facing intense pressure from their base to solve the Dreamers issue, and they are skeptical of Republicans’ credibility when offering to deal. Whether Trump would back the emerging plan or any later proposal on immigration is an open question. Even if the Senate voted on an immigration proposal, its prospects in the House would be grim.

Furthermore, Democrats view Trump as an infuriating bargaining partner, pointing chiefly to his failed eleventh-hour talks with Schumer on Friday. The Democrat says Trump expressed support for a fix for the Dreamers in return for financing for Trump’s wall along the U.S.-Mexico border — only to back off hours later. The White House says Schumer and the president never came to terms.

“How can you negotiate with the president under those circumstances where he agrees face to face to move forward with a certain path and then within two hours calls back and pulls the plug?” said Sen. Dick Durbin, D-Ill., on ABC’s “This Week” on Sunday.