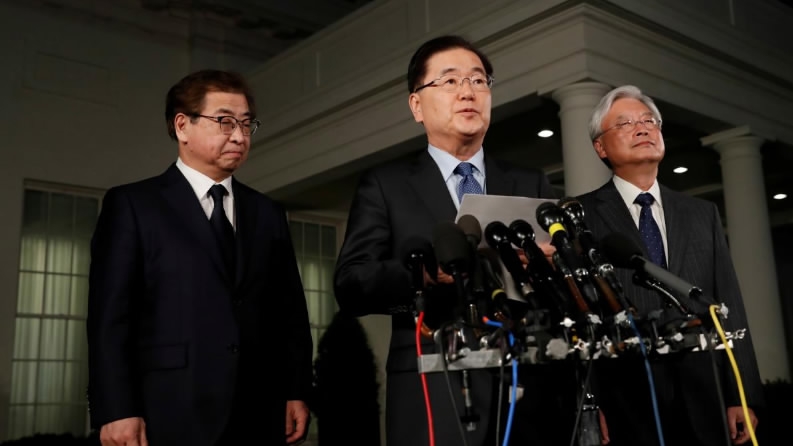 Yonhap news agency reported on Sunday that Chung Eui-yong, head of the ROK National Security Office, will be accompanied by Suh Hoon, chief of the National Intelligence Service.

They have just returned to Seoul from Washington after an earlier trip to Pyongyang where the ROK and DPRK agreed to hold a summit at the border village of Panmunjom at the end of April, the latest initiative to try to sustain the recent ease in tensions on the Korean Peninsula.

The two officials then flew to the US capital to brief Trump on their meeting with Kim. It was after the White House meeting that Chung stunned the world by announcing that Trump had accepted an invitation in principle to meet the DPRK leader.

The tension on the peninsula eased around last month’s Winter Olympics in the South, laying the groundwork for the meeting between Kim and ROK President Moon Jae-in and a possible first meeting between leaders from the DPRK and the US.

China has welcomed the ease in the standoff in the region.

Chinese President Xi Jinping and his US counterpart exchanged views on the latest developments on the Korean nuclear issue. Both leaders said they are pleased to see the positive changes and said they hope to resolve the crisis through political dialogue.

After a two-day trip to China, Chung will fly to Moscow and meet his counterparts through Thursday. Suh plans to visit Japan on Monday, Yonhap said.