A series of bomb blasts occurred in Myanmar over the last four days with the first incident taking place near two private banks -- Yoma and AYA in Lashio, the country's northern Shan state on Wednesday, which was followed by another series of bomb attacks in Sittway, the capital of western Rakhine state, on Saturday.

The bomb blast in Lashio killed two female bank staff, injuring 22 others, while the ones in Sittway injured two people including a policeman. 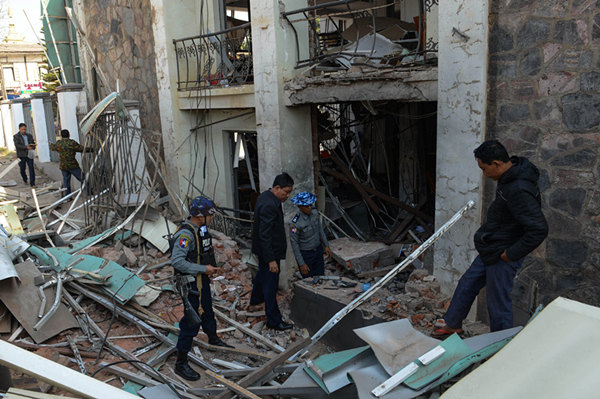 Photo taken on February 22, 2018 shows police and authorities checking the interior of a damaged bank after a bombing in Lashio in Myanmar's Shan state . Two people were killed and 22 wounded when a bomb exploded on February 21 at a bank in northern Myanmar, officials said, amid continuing violence despite a fraught peace process. (Photo:AFP)

The Sittway bomb blasts hit three places -- a state court, a district land record office and residential compound of the secretary of the state government in a minute's interval.

Three other unexploded bombs were also detected as remotely controlled and deactivated in the area.

Soon after the first series of bomb explosions in Lashio, the National Reconciliation and Peace Center (NRPC) issued a statement condemning the terrorist attacks which targeted on public areas and hurt innocent people.

The statement called for effective action to be taken in accordance with law.

State Counselor Aung San Suu Kyi, who is Chairperson of the NRPC, warned that the deadly bomb attacks at the two banks affected government's national reconciliation and peace efforts.

Tight security measures have been imposed on Lashio town and investigation into the incident is underway.

Lashio, a major trading town in northern Myanmar, is the capital city of the country's Shan state where several ethnic armed groups are active.

Earlier this month, two more ethnic armed groups -- the New Mon State Party and Lahu Democratic Union joined the government's ceasefire pact, bringing the total number of ethnic groups that have joined the Nationwide Ceasefire Accord to 10 since the first signing with eight armed groups on Oct. 15, 2015.

Aung San Suu Kyi has called for inclusiveness in the country's national reconciliation and peace process, reiterating the government's welcome of non-ceasefire signatory armed groups to join the signing of NCA and be inclusive in formulating the principles toward a democratic federal union in the future.