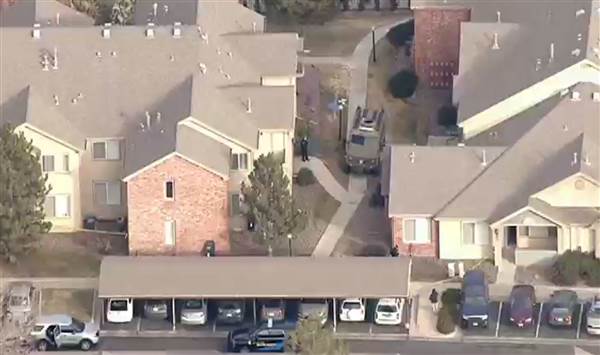 Authorities in Colorado say one deputy has died and four others were wounded, along with two civilians, in a shooting in suburban Denver.

The Douglas County Sheriff’s Office said via Twitter that the shooting happened after deputies were called to the scene of a domestic disturbance in Highlands Ridge early Sunday. The suspected gunman was also shot and is believed to be dead and “no longer a threat.”

The shootings happened at an apartment complex 16 miles (28 kilometers) south of Denver.

A hospital where three people were taken for treatment says those people suffered noncritical injuries. Another nearby hospital said it received four patients but wouldn’t release their conditions.

Authorities in Colorado say an emergency shelter has been set up in the aftermath of a shooting in suburban Denver.

The Douglas County Sheriff’s Office said via its Twitter account that anyone who has “been displaced from their homes” after police were called to the shooting scene in Highlands Ranch can go to the East Ridge recreation center for shelter.

Earlier Sunday, the sheriff’s office said “multiple” deputies were wounded at the Copper Canyon Apartments after being called there to investigate a domestic disturbance.

No information was made available on their conditions or how many deputies were hurt. It was unclear whether anyone else was hurt.

It was also not immediately clear whether anyone was in custody.

Authorities in Colorado say a number of deputies were wounded after being called to the scene of a domestic disturbance in suburban Denver.

The Douglas County Sheriff’s Office said via its Twitter account on Sunday that shots were fired in the course of the investigation and “multiple” deputies were injured.

The shooting happened at the Copper Canyon Apartments in Highlands Ranch. Residents in the vicinity were advised to stay inside and avoid exterior walls and windows.

No information was given on whether anyone else was injured.

Authorities in Colorado say a number of deputies from a sheriff’s office in suburban Denver have been wounded.

The Douglas County Sheriff’s Office said via its Twitter account that a major highway south of the city was shut down Sunday. Residents in the vicinity were asked to shelter in place, and avoid windows and exterior walls.

No other details were immediately available. The nature of the injuries to the Douglas County deputies wasn’t disclosed. It also wasn’t known how many deputies were involved.