Shoppers spending more may make a merry season for retailers 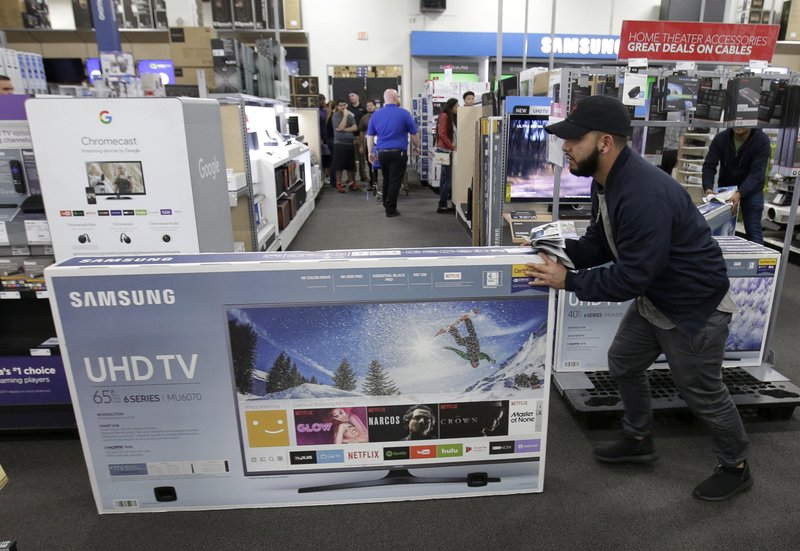 Shoppers who are feeling good about the economy and spending more than expected on items like kitchen gadgets, toys and coats could make this the best holiday season in several years.

That’s good news for retailers, some of which have had few reasons of late to be merry. But there’s no question that stores need to keep adapting to how people shop as spending moves online. Customer sentiment could shift again based on how they feel the tax overhaul is affecting them. Tax cuts mean some shoppers may have more money in their pockets, but they could opt to save it instead of spend it.

Experts have issued rosy forecasts for the season. Shoppers seem to be in the mood as unemployment is at 17-year low and consumer sentiment has reached its highest level since 2000.

“I feel confident and optimistic about spending this year,” said Jorge Nova of Miami as the shopping began on Thanksgiving weekend, when he lined up at Best Buy and bought a 65-inch TV. “I don’t really have a clear budget. It’s been a good year for me.”

Shoppers are spending at a pace not seen since the Great Recession, says Craig Johnson, president of retail consulting group Customer Growth Partners. Jack Kleinhenz, chief economist at the National Retail Federation, predicts retail sales will meet or exceed the trade group’s holiday forecast. That could mark the best performance since 2014. And Tom McGee, CEO of the International Council of Shopping Centers, believes mall traffic and sales were higher than last year as shoppers bought electronics, clothing and toys.

The week leading up to Christmas is critical for stores, accounting for more than 20 percent of traffic for the overall season, says ShopperTrak, which monitors foot traffic. Because of the calendar this year, with a full weekend leading into Christmas, retailers also may see more late shoppers.

“I procrastinate ever year,” said Rick Daigneault of Warwick, Rhode Island, who was just starting his shopping last Sunday at his local mall. “It never fails. Christmas Eve, I’m always at CVS looking for stocking stuffers.”

First Data, a payment technology firm, puts online sales growth at about double the level at stores. Some analysts have said they expect a large portion of the holiday growth to go toward Amazon, which has been expanding into new areas and putting more kinds of retailers on alert. Amazon had said that Cyber Monday was the biggest shopping day in its history, but didn’t provide figures. Estimates suggest the online behemoth accounted for more than 60 percent of all US online sales that day, compared to just under 40 percent on average for the year to date, according to Bain & Co.

LouAnn Vega did all of her shopping online this year, and was finished with more than a week to go before Christmas. She says she discovered a cookware set and clothes online that she couldn’t find in the store, and saved money shopping online.

Her family exchanged wish lists that consist of web link after web link. “You can’t miss,” she said at a suburban Atlanta mall where she came to walk and drink coffee.

Stores are working to adapt. Target increased weekend deals that started in mid-November, and Macy’s revamped its loyalty program for its best customers.

But plenty of stores are struggling. Fifty retailers have filed for bankruptcy this year, according to S&P Global Market Intelligence. Many of them very small companies but some are well-known brands like Payless ShoeSource and Toys R Us. There have been nearly 7,000 announced store closures this year, according to Fung Global Retail & Technology, which exceeds the 2008 peak of 6,200.

But most department stores, which have been struggling over the past three years, seem to have held their own. Macy’s Inc. announced in early December it was adding an extra 7,000 holiday temporary workers because of strong traffic. And some specialty clothing chains like Urban Outfitters and American Eagle Outfitters have said that holiday sales have been strong.

While a good season gives stores a boost in confidence and shows their investments are working, they need to keep up with shoppers. Ken Perkins, president of research firm Retail Metrics LLC, is skeptical about whether the momentum will continue through 2018 and wonders if retailers will be able to drive enough foot traffic to make each store profitable.

Plus, McGee and other analysts say it’s still unclear how exactly the tax changes will affect consumer spending. But McGee does expect shoppers will feel comfortable about spending with more money available.