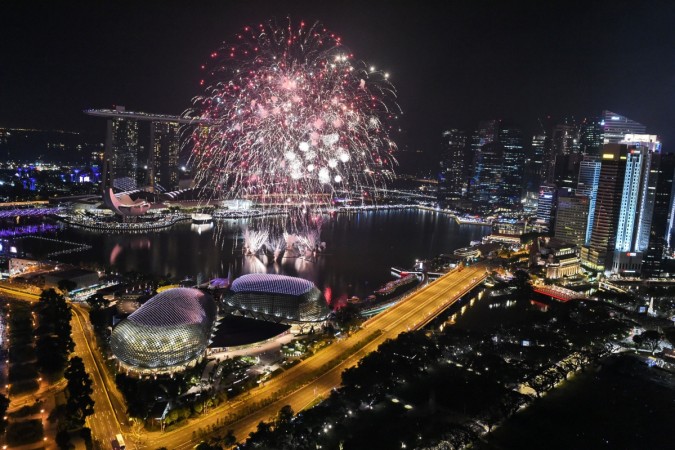 Visitors and local dwellers Sunday gathered at Singapore's Marina Bay and the Civic District in the largest countdown celebration to welcome the year of 2018 amid tight security and in a rainy weather.

Presented by the city-state's Urban Redevelopment Authority, light projection shows and firework displays would be staged in the festive season in different places.

On Dec. 26-31, the facade of the Fullerton Hotel Singapore was transformed into a canvas for light projection displays, telling the journey of the postmaster bears. It reminded the audience of the hotel's days of functioning as a post office.

Moreover, the Merlion and ArtScience Museum joined in the light projection for the first time this year, with a spectrum of projected patterns and colors dance across their facades on Dec. 29-31.

On New Year's Eve, the public was treated with one-minute firework displays punctuating each hourly light projection show for the first time. The year of 2018 would be ushered in by a six-minute midnight firework display set in a linear configuration across the Marina Bay.

They also indulged themselves with a series of programs hosted at four experiential activity hubs across Marina Bay and the Civic District. However, the rainy weather forced the organizers to cancel several outdoor activities and damped in some way the revellers' high spirit.

In the aftermath of occasional terror attacks worldwide, thousands of police personnel were patrolling the streets and drones were deployed to monitor from the sky in efforts to guard against any potential security threat.