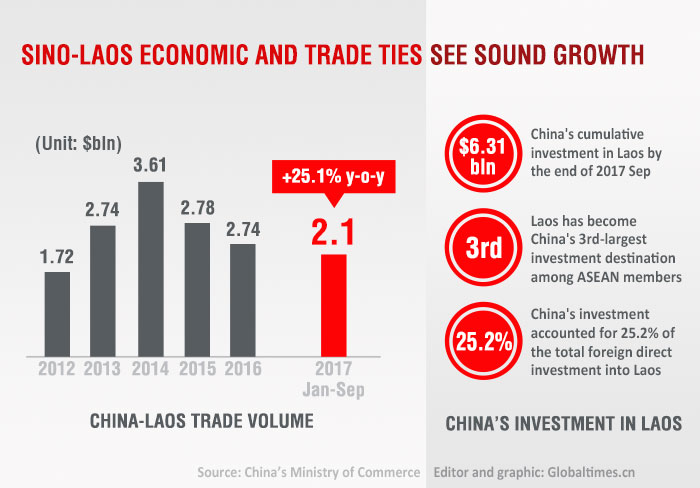 Sino-Vietnamese and Sino-Laos economic and trade relations have achieved good progress in recent years and the ties will grow stronger in the future, a Chinese trade official said Thursday.China's trade with Vietnam rose 20.5 percent year-on-year to $82.3 billion in the first three quarters, and bilateral trade is expected to reach the target of $100 billion this year, Gao Feng, spokesman for the Ministry of Commerce (MOFCOM), told the Global Times at a press conference in Beijing. Investment cooperation between China and Vietnam has entered the "fast lane," Gao noted. China's investment in the country has reached $15 billion so far, he noted, adding that China's newly added investment in Vietnam in 2016 reached $1.28 billion, up 130 percent on a yearly basis."Sino-Laos economic and trade relations are highly complementary and bilateral trade is growing fast," Gao said. From January to September, China's trade with Laos increased 25.1 percent year-on-year to $2.1 billion.Gao noted that plenty of Chinese companies are seeking growth in Laos in sectors such as minerals, electric power and agriculture. By the end of September, China's cumulative investment in Laos had reached $6.31 billion, and Laos has become China's third-largest investment destination among members of the Association of Southeast Asian Nations, Gao noted.In the future, China will actively expand trade and encourage investment with the two countries, Gao said. "China will step up efforts to promote the construction of cross-border and border economic cooperation zones with the two countries," he told the Global Times.According to statistics from Laos, China's investment accounted for 25.2 percent of the total foreign direct investment into the country, MOFCOM said.