A sixth explosion was reported in the city of Austin, Texas late Tuesday, following a series of blasts that have so far killed two people, authorities said.

Emergency officials said they were responding to a reported blast in the southern part of the state capital city.

A man in his thirties was taken to hospital "with potentially serious, not expected to be life threatening, injuries," Austin's medical services agency said on Twitter.

Local media reported that the explosion was at a Goodwill thrift store.

The spate of blasts that began in early March has been mostly contained to Austin, the state capital with a population of nearly one million where two people have been killed and several more injured.

But just after midnight on Monday a package exploded at a FedEx distribution facility in Schertz, outside San Antonio.

Authorities would not confirm media reports that the package contained metal shrapnel and nails.

Although there were no serious injuries in that incident, officials say the attacks are related. 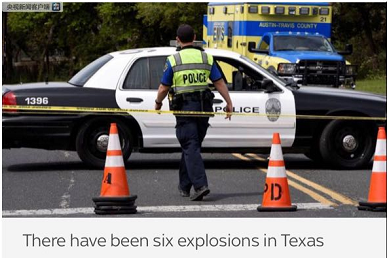