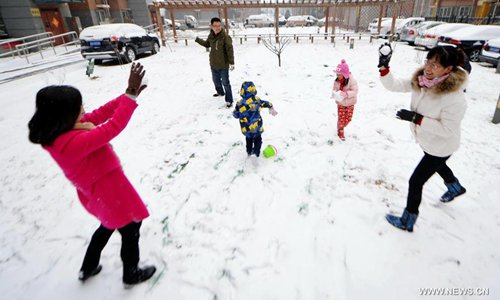 Kids have fun with snow in Yanqing District of Beijing on Saturday. (Photo: Xinhua)

Light to moderate snow or sleet will hit parts of Heilongjiang, Jilin and Liaoning provinces as well as Xinjiang Uygur Autonomous Region from Saturday evening to Sunday evening, with some areas of Xinjiang likely to see heavy snow or blizzards, the NMC said.

Meanwhile, heavy rain will sweep parts of Guizhou, Guangxi, Hunan, Hubei and Jiangxi, with some of the regions possibly seeing rainstorms.

From Sunday evening to Monday evening, snow or sleet will continue to hit parts of Xinjiang and Qinghai-Tibet Plateau, while some areas of Guangxi and Hunan will see rainstorms.

On Saturday, light snow and sleet fell in Beijing, breaking the city's longest dry spell in at least 47 years. The capital had recorded 145 consecutive days without "effective precipitation."