HEADLINE Some in GOP alarmed as Trump tweets against Robert Mueller

Some in GOP alarmed as Trump tweets against Robert Mueller 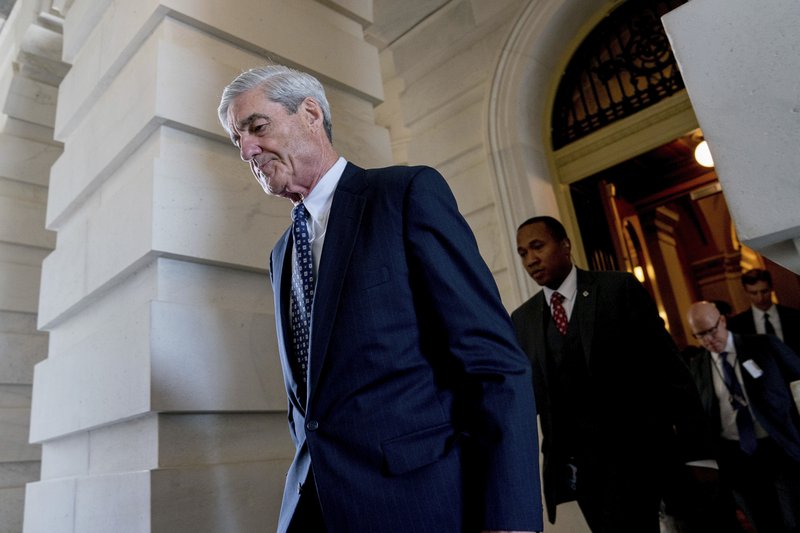 President Donald Trump kept up his attack on the escalating Russia investigation, insisting in a new tweet Monday that it was “a total WITCH HUNT with massive conflicts of interest!” The comment came a day after a top White House lawyer tried to calm speculation that the president was considering firing the special counsel leading the probe.

In a series of weekend tweets, Trump jabbed directly at Mueller by name for the first time. The president challenged the investigation’s existence and suggested political bias on the part of Mueller’s investigators. Trump has long been frustrated by the lengthy and intensifying probe, and insists his campaign did not collude with Russia to influence the election in his favor.

“The Mueller probe should never have been started in that there was no collusion and there was no crime,” he said in a late Saturday tweet.

Likely contributing to Trump’s sense of frustration, The New York Times reported last week that Mueller had subpoenaed the Trump Organization for Russia-related documents. Trump had said Mueller would cross a red line with such a step.

“Why does the Mueller team have 13 hardened Democrats, some big Crooked Hillary supporters, and Zero Republicans?” he tweeted Sunday.

Some of Mueller’s investigators indeed have contributed to Democratic political candidates, but Justice Department policy and federal service law bar discrimination in the hiring of career positions on the basis of political affiliation. Mueller is a Republican.

The tweets revived talk that Trump may, in an attempt to end the investigation, move to have Mueller fired. Cobb sought to tamp down the speculation.

“In response to media speculation and related questions being posed to the Administration, the White House yet again confirms that the President is not considering or discussing the firing of the Special Counsel, Robert Mueller,” he said.

Trump on Monday tweeted: “A total WITCH HUNT with massive conflicts of interest!”

Earlier Sunday, members of Congress, including some top Republicans, warned Trump to not even think about terminating Mueller.

“If he tried to do that, that would be the beginning of the end of his presidency,” said Sen. Lindsey Graham, R-S.C., a Trump ally.

Rep. Trey Gowdy, R-S.C., chairman of the House Oversight and Government Reform panel, warned Trump that a Mueller firing would be a distraction from the president’s agenda.

“Let it play out its course,” Gowdy said on “Fox News Sunday.” ″If you’ve done nothing wrong, you should want the investigation to be as fulsome and thorough as possible.

House Speaker Paul Ryan said through a spokeswoman that “Mr. Mueller and his team should be able to do their job.”

And Sen. John McCain, R-Ariz., tweeted that it is “critical” Mueller be allowed to complete a thorough investigation “unimpeded.”

Sen. Dick Durbin, D-Ill., called for passage of stalled bipartisan bills designed to protect Mueller. He said Trump “is engaged in desperate and reckless conduct to intimidate his law enforcement agencies of this country and to try and stop the special counsel. That is unacceptable in a democracy.”

Trump cannot directly fire Mueller, who can only be dismissed for cause. Any dismissal would have to be carried out by Rod Rosenstein, the Trump-appointed deputy attorney general who has publicly expressed support for Mueller.

Trump has fumed to confidants that the Mueller probe is “going to choke the life out of” his presidency if allowed to continue unabated indefinitely, according to an outside adviser who spoke on condition of anonymity to discuss private conversations with the president.

Trump has long believed that the entrenched bureaucracy, particularly at the Justice Department and FBI, is out to thwart him. He fumed to one confidant after seeing a promotion for a forthcoming book by James Comey, the FBI director he fired last year, believing Comey will seek to enrich himself by besmirching Trump’s reputation. Comey’s book, “A Higher Loyalty,” topped Amazon.com’s best-seller list on Sunday.

The president also has long been torn over how to approach the probe. His legal team, namely Cobb, has counseled Trump to cooperate with Mueller. But some former campaign advisers have urged Trump to be combative, warning that the investigation poses an existential threat to his presidency.

Marc Short, Trump’s congressional liaison, said the frustration is “well-warranted” because “there has been no evidence whatsoever of collusion.”

Trump may have felt emboldened after Attorney General Jeff Sessions fired former FBI deputy director Andrew McCabe on Friday, something Trump had clamored for out of a belief that McCabe was part of the entrenched, anti-Trump bureaucracy. “A great day for Democracy,” Trump tweeted afterward. Trump asserted without elaboration that McCabe knew “all about the lies and corruption going on at the highest levels of the FBI!”

The Associated Press later reported that McCabe kept personal memos detailing interactions with Trump that have been provided to Mueller’s office and are similar to notes compiled by Comey. Trump sought to cast doubt on their veracity, tweeting Sunday that he spent “very little time” with McCabe “but he never took notes when he was with me.”

“I don’t believe he made memos except to help his own agenda, probably at a later date. Same with lying James Comey. Can we call them Fake Memos?” Trump tweeted. It wouldn’t be unusual for a senior official to make notes soon after meeting with the president.

The contents of McCabe’s memos are unknown, but they could help substantiate McCabe’s assertion that he was unfairly maligned by a White House he says had declared “war” on the FBI and Mueller’s investigation.

Sessions said he dismissed McCabe on the recommendation of FBI disciplinary officials who said McCabe had not been candid with a watchdog office investigation. An upcoming inspector general’s report is expected to conclude that McCabe had authorized the release of information to the media and was not forthcoming with the watchdog office as it examined the bureau’s handling of an investigation into Democrat Hillary Clinton’s emails.

McCabe has vigorously disputed the allegations and said his credibility came under attack as “part of a larger effort not just to slander me personally” but also the FBI and law enforcement.

Mueller is investigating whether Trump’s actions, including Comey’s ouster, constitute obstruction of justice.