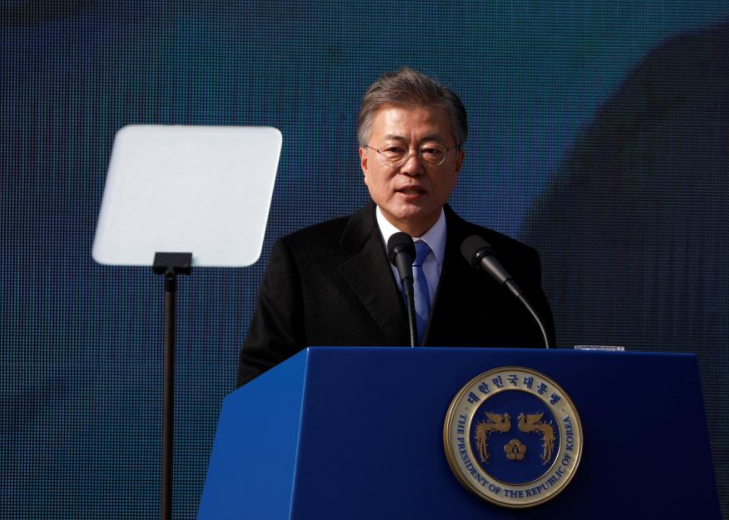 South Korean President Moon Jae-in said on Wednesday a three-way summit with North Korea and the United States is possible and that talks should aim for an end to the nuclear threat on the Korean peninsula.

Moon is planning a meeting with North Korean leader Kim Jong Un next month after a flurry of diplomatic activity in Asia, Europe and the United States. US President Donald Trump has also said he would meet Kim by the end of May.

“Depending on the location, it could be even more dramatic. And depending on progress, it may lead to a three-way summit between the South, North and the United States,” he said.

Seoul officials are considering the border truce village of Panmunjom, where Moon and Kim are set for a one-day meeting, as the venue for talks between not only Kim and Moon but also a possible three-way meeting.

A Blue House official, speaking on condition of anonymity, said Moon did not specifically refer to Panmunjom or that a three-way summit had been discussed with Washington before the president spoke.

The rush of recent diplomatic contacts began in the lead-up to the Winter Olympics in South Korea last month and helped ease tensions on the Korean peninsula caused by North Korea’s pursuit of its nuclear and missile programs in defiance of United Nations Security Council sanctions.

South Korea wants to hold high-level talks with North Korea on March 29 to discuss a date and agenda for the inter-Korean summit and make a formal request to the North on Thursday, Moon’s presidential office said.

North and South Korean officials should be able to agree on when the summit between Moon and Kim will take place once the officials from both sides meet this month, the Blue House official said.

Moon said the series of summits should aim for a “complete end” to the nuclear and peace issues on the Korean peninsula.

He said he has a “clear goal and vision”, which is for the establishment of a lasting peace to replace the ceasefire signed at the end of the 1950-53 Korean war. It also includes the normalization of North Korea-US relations, the development of inter-Korean ties, and economic cooperation involving Pyongyang and Washington, he said.

However, the United States must also add its guarantee in order for peace to come about, Moon said.

“Whether the two Koreas live together or separately, we have to make it in a way that they prosper together and in peace, without interfering or causing damage to each other,” Moon said.

The Blue House official said this could mean stopping propaganda broadcasts at the border that are commonly blasted from both sides over loudspeakers. The official could not say whether “interference” also referred to criticism over widely recognized human rights violations in North Korea.

South Korea and the United States will resume joint military drills next month, although the exercises are expected to overlap with the summit between the two Koreas.

Seoul and Washington delayed the annual drills until after the Winter Olympics, helping to foster conditions for a restart of such talks.

North Korea regularly denounces the drills as preparation for war but a South Korean special envoy has said Kim understood that the allies must continue their “routine” exercises. That exchange has not been confirmed.

The North’s official KCNA news agency said on Wednesday a “dramatic atmosphere for reconciliation” had been created in cross-border ties and there had also been a sign of change in North Korea-US relations.

That was “thanks to the proactive measure and peace-loving proposal” made by Pyongyang, not Trump’s campaign to put maximum pressure on the country, KCNA said in a commentary.

The Blue House official also said earlier on Wednesday South Korea was in discussions with China and Japan for a three-way summit in Tokyo in early May. The three countries have not held such a meeting since November 2015, with relations soured by historical and territorial tensions.