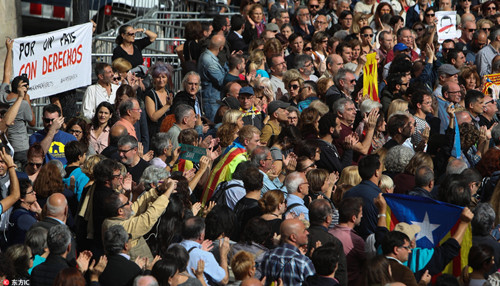 The prosecutor made the petition to investigative magistrate Carmen Lamela on Thursday after ex-Catalan president Carles Puigdemont failed to appear in the Madrid court for questioning in a rebellion probe following the Catalan parliament's declaration of independence from Spain Oct. 27.

Puigdemont, who is in Belgium with four of his ex-Cabinet members, said he will ignore the summons, which could trigger a warrant for his arrest and an extradition petition.

The group summoned includes his 13-member former Cabinet and six parliamentary board members.

Earlier, the judge questioned nine other Catalan ex-ministers and prosecutors asked for eight to be jailed unconditionally and one given the chance to pay bail. The crimes being probed are punishable with up to 30 years in prison under Spanish law.

Spain's central bank is warning of the economic costs of the Catalan political crisis, which it says could damage the country's growth.

Thousands of people are rallying outside the Catalan presidential palace in Barcelona in a show of support for ousted Catalan officials appearing in court in Madrid.