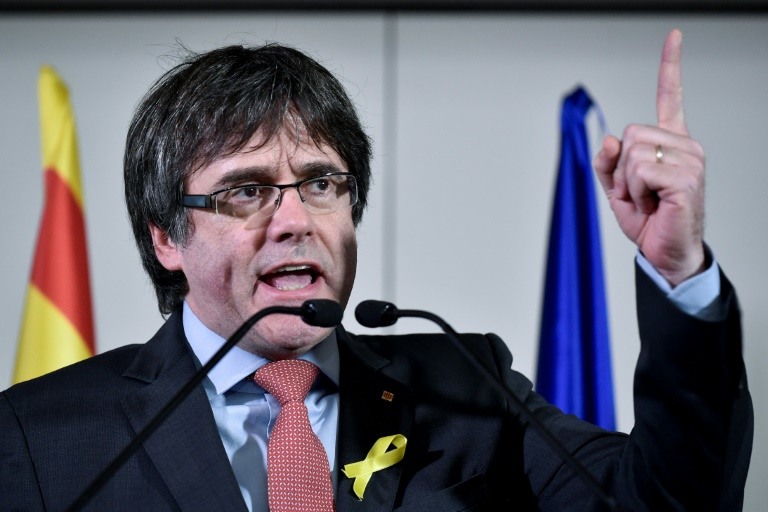 The prosecution service said it would "immediately" have a supreme court judge issue an arrest warrant for the secessionist leader, sacked by Madrid after the Catalan parliament declared independence on October 27, and urge Denmark to hand him over.

Puigdemont fled to Belgium in late October after Madrid sacked his cabinet over their breakaway attempt, but is eyeing a return to power after pro-independence parties won an absolute majority in regional elections in December.

At home, however, he risks arrest on charges of rebellion, sedition and misuse of public funds.

Several fellow separatist lawmakers are already in custody in Spain over their role in the regional parliament unilaterally declaring independence on October 27 and Spain's general prosecutor office said Saturday that "it's inadmissible that the privilege of parliamentary immunity should be interpreted as impunity."

A final decision will rest with the Spanish judge who will have to act in record time to issue the warrant for examination by Danish authorities.

Supreme Court Judge Pablo Llarena dropped a European arrest warrant for Puigdemont and four of his deputies who fled to Belgium in early December, saying it would complicate the overall probe into the region's leaders -- but warned they would be arrested if they return, retaining a domestic warrant.

Were a magistrate in another EU state to make a ruling on the secessionists -- including to drop charges which could bring a maximum 30 years in jail -- Madrid would be bound by that decision.

Those facing charges say in their defence that under Belgian law there is no case against them. As long as he does not return to Spain, where the warrant remains in place, Puigdemont and his fellow lawmakers are therefore free to move around Europe as they please.

Puigdemont is due to take part in a debate at the University of Copenhagen about the secession crisis in the region, according to the university website.

The conference is titled: "Catalonia and Europe at a crossroads for democracy?"

It will be his first public trip since he arrived in Belgium. Having been in the country for three months without a residence permit, he would also have to leave, albeit briefly, to conform with EU residence laws.

On Monday, Puigdemont is due to reveal which candidate he is putting forward to lead the region ahead of a debate culminating in a vote at the end of the month.

He himself is the main candidate but wants to be invested from Belgium in order to avoid arrest if he returns to Catalonia. The Madrid government has ruled out his being allowed to rule from outside the country.