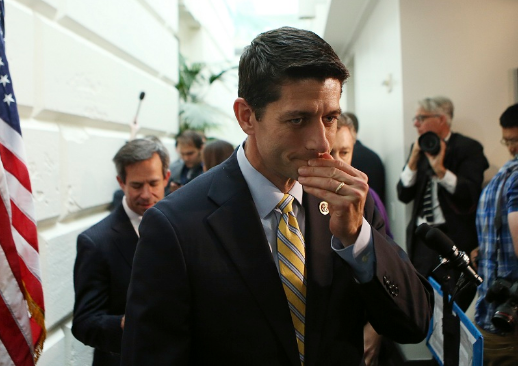 Speaker of the US House of Representatives (Photo: Reuters)

Washington (People's Daily) - US House of Representatives Speaker Paul Ryan announced on Wednesday he will not seek re-election during this year’s mid-term run offs, a move that further complicates the struggle between Republicans and Democrats for House majority this fall.

It had long rumored that Ryan was considering stepping down.

During Wednesday’s announcement, the GOP speaker explained his decision was simply the result of wanting to spend more time with his family.

Ryan said his daughter was 13 when he became House leader, and he did not want to be a remote figure throughout her teenage years.

However, analysts in Washington have said Ryan’s decision is partly related to his rocky relationship with President Donald Trump. It was known that the Speaker didn’t see eye-to-eye with Trump.

In response to Ryan’s decision, Trump tweeted, “Speaker Paul Ryan is a truly good man, and while he will not be seeking re-election, he will leave a legacy of achievement that nobody can question. We are with you Paul!”

Ryan’s departure comes at a time when both Congressional parties are facing a fierce battle over House majority. In November, every House seat will be open for new election.

Ryan’s announcement surprised many of his Republican colleagues. Last week, he hosted a donor retreat in Texas and most thought he would not leave until after November. So far, more than 40 House Republicans have already voiced their plans to exit this fall.

Ryan’s departure kick off a succession battle for the Speaker role at the Republican conference, and will likely happen between House majority leader, Kevin McCarthy of California, and majority whip, Steve Scalise of Louisiana.

Ryan pointed to the new tax code overhaul and increased military spending as his crowning achievements during his time as speaker of the House.

An official statement from GOP House Ways and Means Committee Chairman Kevin Brady said, “No Speaker of the House in history has achieved more in such a short time as Paul Ryan. He set a bold agenda for Congress – reform the tax code, rebuild the military, restore the free market to health care, and help move people from dependency to opportunity – all to put our nation back on a path to prosperity and renew the American Dream."