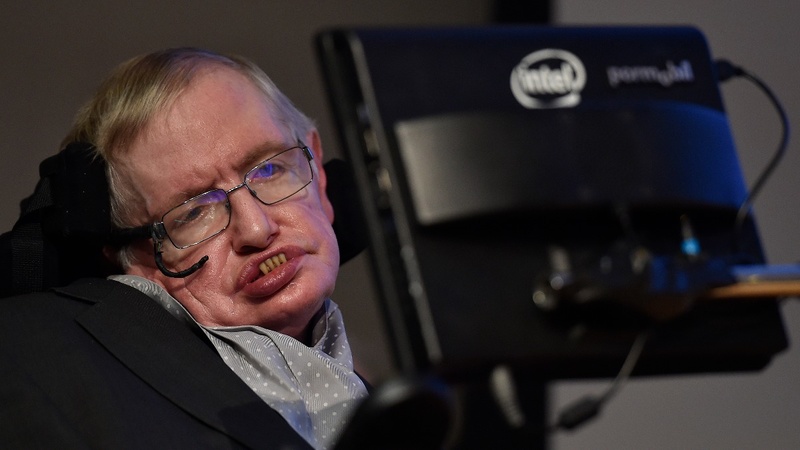 When the news of legendary physicist Stephen Hawking's death broke Wednesday morning, Gou Lijun thought it was just another rumor.

"Every time he turned out to be fine. I've always thought he would live on, in his wheelchair, smiling, for a very long time. I was astonished to learn it was true," said Guo, a researcher at the National Astronomical Observatories of China.

The British physicist has died at the age of 76, a family spokesperson announced Wednesday.

Hawking, a towering figure in the modern history of physics, authored several science best-sellers, including "A Brief History of Time," despite becoming wheelchair-bound a few years after being diagnosed with a motor neuron disease in 1963.

"Hawking made a great contribution to science and humanity," Lu said, adding Hawking was very fond of Chinese culture, and had realized his wish to reach the Great Wall, with the help of his assistants.

Hugo Award-winning author Liu Cixin expressed his grief over the death of Hawking.

"There are people who can only flicker their eyelids, but their thoughts may travel far into space. There are those whose bodies are robust and strong, but their minds are weak and they are destined to live their entire lives dependent on others," the science-fiction writer said.

In the end of one of Liu's short stories, Hawking, on behalf of humankind, asks the ultimate question to an alien: "What is the purpose of the Universe?"

No answer appears in the sky. The smile on the alien's face disappears, and a flash of unnoticeable panic occurs in his eyes.

Liu, author of "The Three-Body Problem," was the first Asian writer to receive the Hugo Award for Best Novel, the top sci-fi award, in 2015.

"He has fought serious illness for a long time to obtain outstanding achievements in physics -- in particular, the studies on black holes and cosmology," Liu said.

"He is very different from other scientists. He went through more hardships than most scientists," Liu added.

In his last post, published on Nov. 24, 2017, the physicist presented a video response to a question about life beyond Earth from Wang Junkai, the lead singer of TFBOYS, China's most popular boy band.

The post has received more than 70,000 comments and 217,000 "likes" so far. Nearly 1,000 comments were posted Wednesday, followed by emojis such as candles, praying palms and crying faces.

"A giant in a wheelchair and a great physicist for the world, Hawking has written his legend with a strong spirit," read one comment on Weibo.

"Greetings to my friends in China! It has been too long!" his first entry said.

Hawking said his first trip to China was in 1985, when he traveled across the country by train.

"In my physical travels, I have only been able to touch the surface of your fascinating history and culture," Hawking said in the post, using the signature S.H. to indicate he was personally making the entry.

Stories and features about him also went viral on WeChat.

"Hawking just left his wheelchair and flew to the stars," commented one netizen.

"He just entered another space -- may he rest in happiness," said another WeChat user.

AN INSPIRATION FOR ALL AND FOREVER

Hawking's A Brief History of Time has long been a bestseller in China's bookstores. On Douban.com, China's leading book rating platform, several hundred readers have put the Chinese version of the book into the category of "want to read" within hours of his passing.

Amazon's China site has launched a webpage dedicated to Hawking, saying that reading the master's classics is the best way to pay tributes to him.

A Brief History of Time remains the first place on the sales list of the website under the category of astronomy, which is refreshed every hour.

On China's major online book retailer Dangdang.com, this book received more than 240,000 comments and ranked second in the past 24 hours on the sales list of science education.

In 2015, Hawking participated in launching the Breakthrough Listen program to search for intelligent extraterrestrial communications in the Universe.

The FAST radio telescope in China also joined the initiative for a coordinated search, including the rapid sharing of promising new signals for additional observation and analysis.

Located in a naturally deep and round karst depression in southwest China's Guizhou Province, the Five-hundred-meter Aperture Spherical Radio Telescope (FAST), the world's largest single-dish radio telescope, has a receiving area equivalent to about 30 football fields.

Since FAST started trial operations in September 2016, it has discovered 51 stars, which bear features similar to pulsars, and 11 of them have been confirmed as new pulsars by observatories in other countries.

Li Di, chief scientist of the NAOC radio astronomy division, said an individual scientist's curiosity is closely bound up with the fate of all mankind. Every step forward, no matter how small, is a precious treasure for the world.

"In this regard, Professor Hawking set a noble example for all Chinese scientists," Li said.