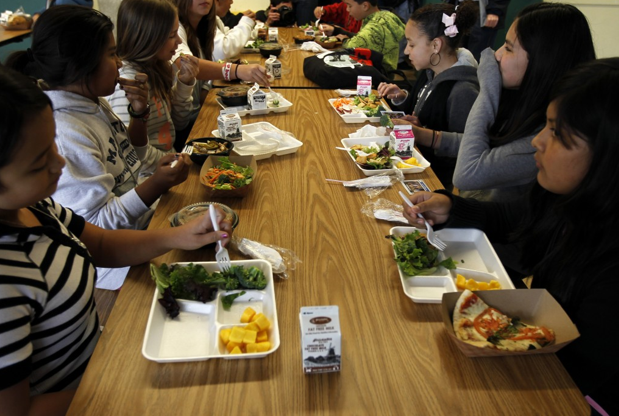 Students enjoying a healthy meal at a middle school in California, prior to the passage of SB 250. Photo: Reuters

Compared to the hazards of extremism, or the exploitation of minors in some parts of the world, school kids being humiliated or stigmatized on campus seems hardly a problem. But for a child who’s being pestered because he or she sticks out among peers, lunchtime is the predicament of the day.

With SB 250 kicking in, California joined a handful of states on New Year’s Day to safeguard pupils from being demeaned in school if their lunch balance in overdue. Such practices have the effect of labeling students in harmful ways, and shaming them for the inadequacies of their parents.

No matter the purpose, these methods are misguided and cruel. Being singled out before peers is one of the worst experiences a child can suffer. It’s something few of us care to envision, or remember.

Even the personnel consigned to carry out these policies don’t appreciate them. A cafeteria employee in Pennsylvania chose to resign rather than withhold hot lunches from students, as ordered by other ‘adults’ – a clue, perhaps, as to the prevalence of callousness amongst kids, or even cruelty.

I taught at underprivileged schools for a decade. It was difficult to watch poor kids stand in line while others walked by, or made it to the chips and soda machine. I remember the troubled faces. Some kids skipped lunch entirely, choosing to go and hang around in the library instead.

That was a while back. Now students have more to contend with, even, physically and emotionally. So we, ‘grown-ups’ – the stewards in charge of their world – shoulder the responsibility of ensuring, from the moment they step out into ‘our world,’ they are springy, spirited, and ready to learn.

Since school administrators are frustrated by parents who cannot or will not meet their obligations, and federal policies will not compensate districts for meals given to those who do not qualify for free lunch (for lack of a better term,) why not consider the well-known – inventive alternatives fellow Americans previously tapped in pursuit of this very problem.

▪ Of a humble background himself, New Mexico Senator Michael Padilla introduced the Hungry-Free Students’ Bill of Rights, which urged schools to work with parents to settle debts, or help them apply for federal assistance.

▪ Writer and Twitter trotter Ashley Ford urged her New York followers to help liberate local kids from the tyranny of unsettled school lunch and her tweets garnered an impressive response. Over 1,500 donors in the Minneapolis area came through, doling out, not without a smile, close to $140,000 for indispensable school lunches.

▪ Boston Mayor Marty Walsh hopes schools nationwide offer free lunch to all their students, regardless of family income – a notion that has been gaining support.

Children do not have control over adults’ actions. They cannot construct curriculums or implement emergency plans or acquire a hot lunch if their parents or school don’t set them up with one.

Some of us adults have hocked the virtue of ‘putting kids to work,’ such as cleaning cafeteria tables in front of peers, or stamping their impressionable hands with telltale messages. All of us have heard the comics who spoke of untold mistakes and ensuing consequences, and how they ended up learning the hard way.

Making children pay for their parents’ shortcomings falls well outside the sphere of teaching foresight and responsibility. Now that SB 250 is the law and it has been agreed that leaving children hungry, embarrassed and unready to learn is a path no institution should follow, it’s time to move the yardstick up a notch.

There is much room for improvement. No child wants to be handed a cold cheese sandwich in place of a hot lunch, in front of her peers.

In some cases, parents omit the application process entirely, yet assume the school will provide the meals to their hungry kid. In others, a struggling family may earn enough to disqualify it from the subsidized-meals program, but dealing with other expenses, may fail to keep up with the district’s payment schedule.

Critics of the law claim that the assumption schools are somehow “shaming” kids who cannot afford to pay for their lunch is erroneous.

These critics assert that child nutrition programs are federally funded and mandated through the USDA. This necessitates that debts incurred through the program be paid off at the close of each year. If parents do not pay up, the school districts are often forced to shoulder the debt and reimburse the balance.

Of course, schools should reach out to parents, issue reminders, and help with paperwork. All these efforts are gallant and good. But this is not merely a question of balancing books.

All the paid tabs in the world cannot account for the fact some kids are mortified when treated differently, or singled out in any way. There is no such thing as a ‘free lunch.’

Someone always pays. And when grown-ups choose to lob mud (or blame) at each other, it’s the kids who get it in the face, too often.

All kids thrive alike. Each kid pays in his or her own way.

An idea has been floating around, and It’s hardly a secret. It says all kids in a school with a high percentage of poor enrollees eat free. Pure and simple.

It’s not an earth-shaking phenomenon. Not a billionaire’s tweet talked up by a lawyer inside a press packed ballroom and two suits.

This ‘idea’ feeds the kids. It also does something other well-meaning paradigms don’t.

It saves the grown-ups the lunchroom fight. And the kid who creeps up to the library this time just about all the time, everyday… two grains of grief and a stigma-sandwich.