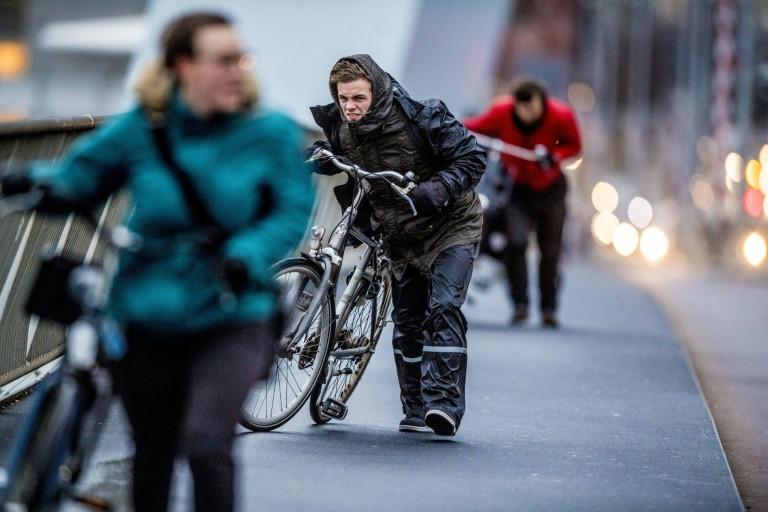 Dutch insurers said Friday that fierce storms that whipped across The Netherlands caused 90 million euros ($111 million) in devastation, as the country's train service slowly creaked back into gear.

"The January storm that raged across our country yesterday caused considerable damage," the Dutch Association of Insurers said.

"According to our first estimates, the damage to homes and cars is at least 90 million euros," it said, cautioning that it had not yet added in the cost of any havoc to businesses, government buildings and the agriculture sector.

The Netherlands bore the early brunt of Thursday's severe winter storms which blew in with winds of up to 140 kilometres (86 miles) an hour off the North Sea.

It then barrelled across northern Europe, leaving nine people, including two firefighters, dead in its wake.

The Dutch railway service, NS, had cancelled all trains on Thursday, stranding thousands of commuters and travellers.

On Friday morning, many trains were running again although railway staff were still busy clearing away fallen trees from the tracks, and fixing overhead lines.

There were still no trains serving the busy route between Schiphol airport and Leiden Central "due to a defective overhead line", although buses had been laid on, NS said. The problem should be fixed by midday, it added.

Schiphol airport, one of Europe's busiest flight hubs, was forced to cancel all flights in or out for about two hours on Thursday.

In a Tweet Friday, it said it "expects a normal day but it can be busier at the airport due to cancellations and rebooking of yesterday's flights".

Resourceful travellers late Thursday had turned to Twitter to get to their destinations, setting up a hashtag #StormPoolen (storm carpool).

"My lovely boyfriend is trying to get from Leiden Central to Delft. He’s very nice and there’s a bottle of wine in it for whoever can return him unharmed. #StormPoolen," wrote Twitter user Molly Quell.

Puk van de Lagemaat promised "mad Dj-ing and Karaoke skills to accompany you in the traficjam (sic)" if anyone could give her a ride from Amsterdam central station to The Hague.