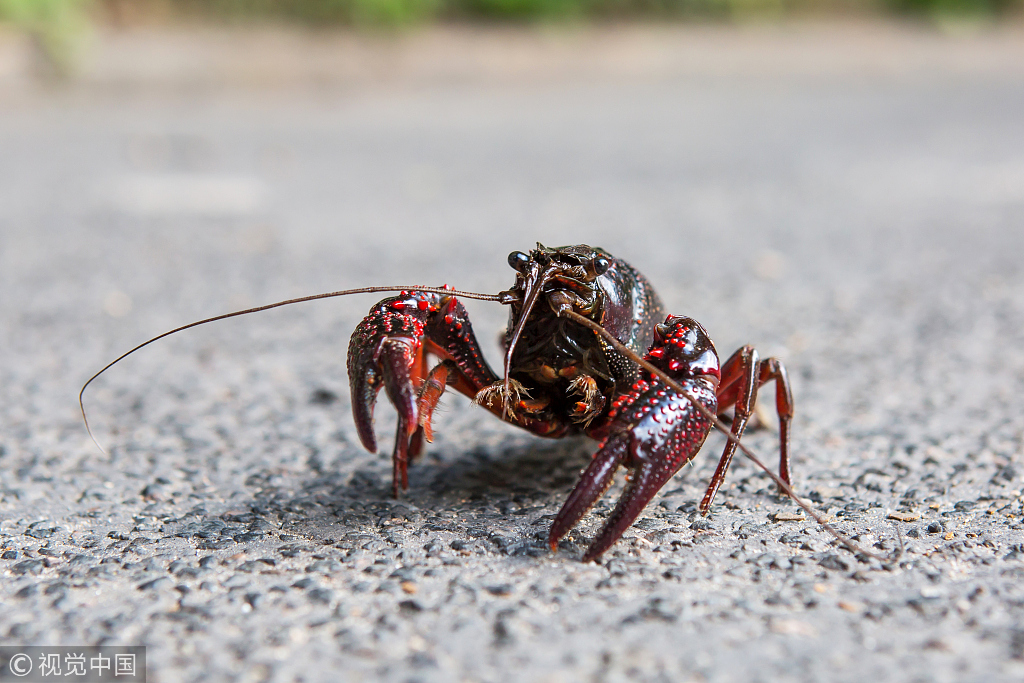 A crayfish appears on the road of Berlin, Germany. (Photo: VCG)

Berlin (People's Daily) - An invasion of displaced crayfish roaming a park district in the heart of Berlin could soon become a source of food for local markets and restaurants.

Last summer, the crayfish made headlines. Tourists and Berliners alike were astonished at the time when they discovered the creatures running around the paved paths of the Tiergarten district. The "scorpions" or "shrimps" ironically piled up on the asphalt outside the Berlin Conservation Association offices.

It turns out mild winters over the past few years had caused the rapid reproduction of the invasive animals, and due to many rainy days in the summer, they crawled out of their hiding places.

After testing the crayfish over the winter and ruling out their containing heavy metals and contaminants, the environmental administration has permitted one family-owned fishing company to hunt them. The family business from Berlin's Spandau district now wants to sell the creatures to restaurateurs and private individuals in markets.

According to reports, there are no hunting limits. Soon, the delicacies could appear on the menus of local restaurants.

The fact that the Spandau fishermen have now laid out their traps in the district’s zoo is not only because of culinary reasons.

"We have to prevent the spread of the crayfish, because the genus is on the EU list of invasive species," explains Derk Ehlert, a wild fauna expert from the Berlin Senate's environmental department. The list includes immigrant animals can harm native species or the ecosystem.

Red swamp crayfish, or Procambarus clarkii as the species is called, can reduce fish stocks and displace other animals. They are considered gluttons, and feed on tadpoles or insect larvae. The crustaceans also transmit infectious diseases such as cancer. But this is hardly possible in Berlin, because there are no local crayfish here that could get infected.

The fishermen already caught 2,000 crayfish in Tiergarten and Britzer Garten parks last week. A total of 20 traps are used by the fishermen to catch the delicacies in both parks.

"It is quite possible that more locations and traps will be added in this summer if we discover crayfishes somewhere else," said the wildlife expert. Ehlert cannot estimate how big the crayfish population in Berlin may be. The fishing permit is valid until the end of 2018.

Permission is absolutely necessary. Those who try their luck will risk a monetary fine or even a prison sentence for poaching.