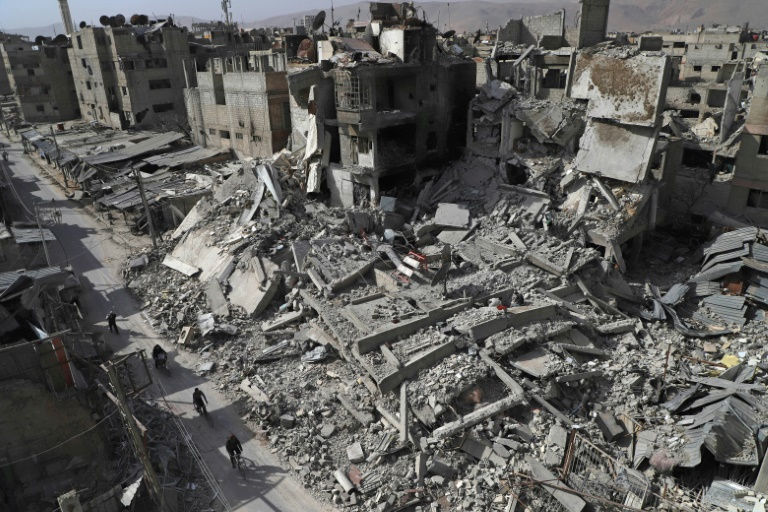 A general view shows several destroyed buildings in Douma, in the rebel enclave of Eastern Ghouta on the outskirts of Damascus on March 5, 2018. (Photo: AFP)

Heavy air strikes and clashes shook the Syrian rebel enclave of Eastern Ghouta on Tuesday, as France and Britain called for an emergency UN Security Council meeting on the escalating violence.

Eight hundred civilians -- including at least 177 children -- have been killed since Russia-backed regime forces launched an assault on the besieged enclave outside Damascus on February 18, the Syrian Observatory for Human Rights said in its latest death toll.

Russia suffered its own heavy losses on Tuesday as the defence ministry said a Russian transport plane crashlanded at an airbase in western Syria, killing all 32 people on board.

Bombardment and clashes in Eastern Ghouta, the last major rebel stronghold near Damascus have persisted despite a month-long ceasefire demanded by the Security Council more than a week ago.

At least 19 civilians were killed on Tuesday, according to the Syrian Observatory, a Britain-based monitor.

The relentless attacks prompted France and Britain to request an emergency meeting of the top UN body, expected to gather on Wednesday, to discuss the ceasefire's failure to take hold.

Government troops have advanced rapidly across farmland in Eastern Ghouta in the past week and had wrested control of 40 percent of the enclave as of early Tuesday. 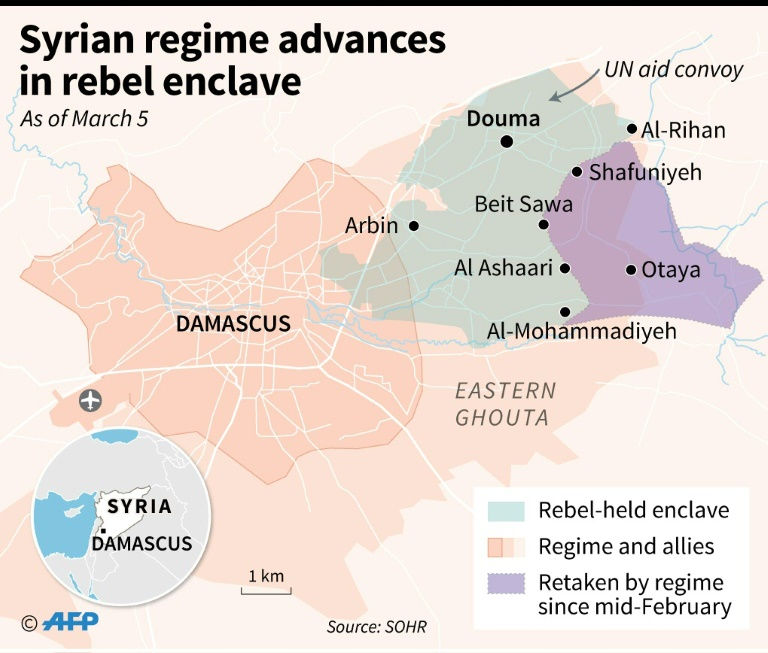 In the enclave's main town of Douma, air strikes have reduced homes to piles of rubble on both sides of the road, an AFP correspondent reported.

Exhausted civil defence workers on Tuesday took advantage of a few hours of calm to dislodge the body of a resident, killed in bombardment several days ago, from a collapsed building.

Other civilians used the lull in air strikes to venture out from cellars to gather a few necessities from what was left of their homes. 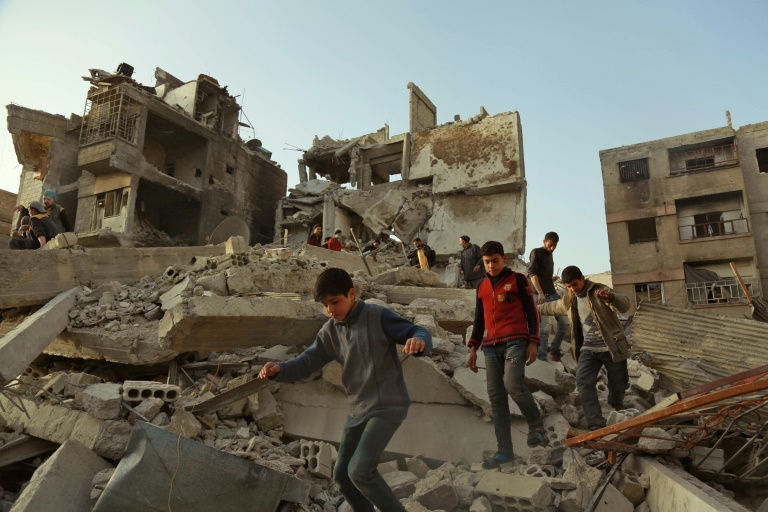 Syrian civilians walk through the rubble of destroyed buildings in the Eastern Ghouta town of Douma on March 5, 2018. (Photo:AFP)

Some gathered the pieces of furniture smashed in the raids to use as fuel or sell to their neighbours.

An AFP reporter in Hammuriyeh said air strikes were continuing to pummel the town on Tuesday.

The raids came after around 18 people suffered breathing difficulties in the town following a strike there late Monday, the Observatory reported.

It had no firm word on the cause.

Eastern Ghouta's around 400,000 residents have lived under government siege since 2013, facing severe shortages of food and medicines even before the latest offensive began.

Forty-six aid trucks entered Eastern Ghouta on Monday for the first time since the offensive started, but had to cut short their deliveries and leave due to heavy bombardment.

"The people we've met here have been through unimaginable things. They looked exhausted," Pawel Krzysiek of the International Committee of the Red Cross said afterwards. 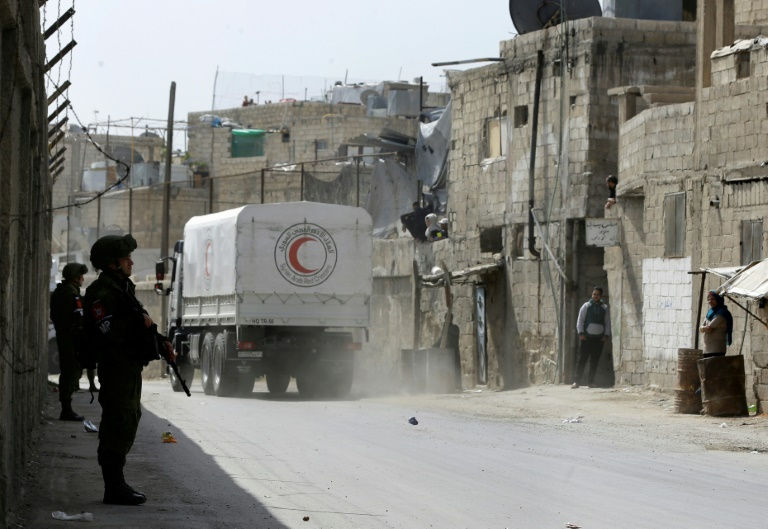 "And the aid we've delivered today is by no means enough," he said on Twitter, ahead of another aid delivery planned for Thursday. (Photo:AFP)

The UN Human Rights Council on Monday ordered investigators to examine the latest violence in the enclave.

It condemned "the indiscriminate use of heavy weapons and aerial bombardments against civilians, and the alleged use of chemical weapons in Eastern Ghouta".

Eastern Ghouta is the last opposition bastion on the Syrian capital's doorsteps, and the regime is keen to retake it to secure Damascus.

Rebels there have fired waves of rockets and mortars onto eastern Damascus neighbourhoods.

On Tuesday, three civilians were killed and eight wounded in mortar fire on the neighbourhood of Jarmana, according to state news agency SANA.

Regime ally Russia last week announced a five-hour daily "humanitarian pause" in the region, during which it said it would guarantee safe passage to civilians wishing to flee the enclave.

No Syrian civilians are known to have used the "humanitarian corridor". 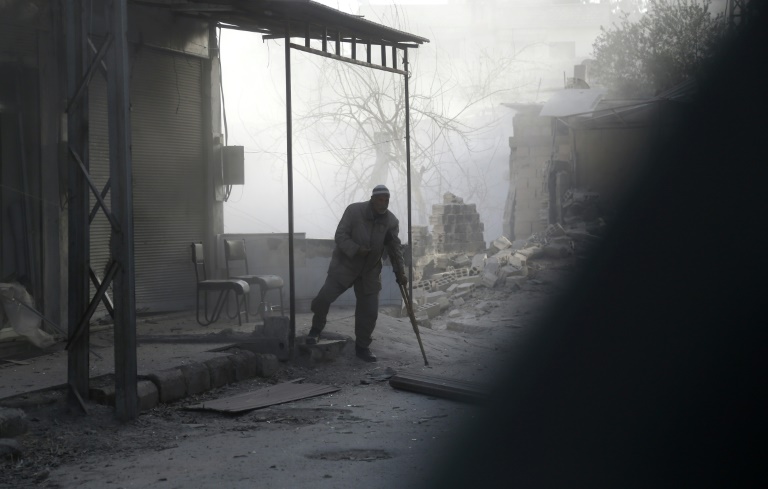 A wounded Syrian man walks in the street covered in dust following reported government bombardment of the rebel-held town of Hammuriyeh in the besieged Eastern Ghouta region on the outskirts of the capital Damascus on March 5, 2018. (AFP)

On Tuesday, Russia announced that the exit route had been expanded to allow rebels, not just civilians, to leave the enclave.

Russia's air force intervened in Syria in 2015 on behalf of President Bashar al-Assad, helping his troops retake key cities across the country.

Moscow's defence ministry said on Tuesday that a Russian transport plane crashed on landing at the Hmeimim airbase, killing its 26 passengers and six crew members.

"The reason for the crash according to preliminary information could have been a technical fault," the ministry said, adding that the plane had not come under fire according to a report from the ground.

More than 340,000 people have been killed and millions displaced in Syria since the start of the civil war in 2011 with the brutal repression of anti-government protests.

Over the years, numerous rounds of UN-backed Syria peace talks have failed to stem the fighting.

In the latest attempt to end the seven-year war, the foreign ministers of regime allies Iran and Russia and rebel backer Turkey are to meet next week in Astana.