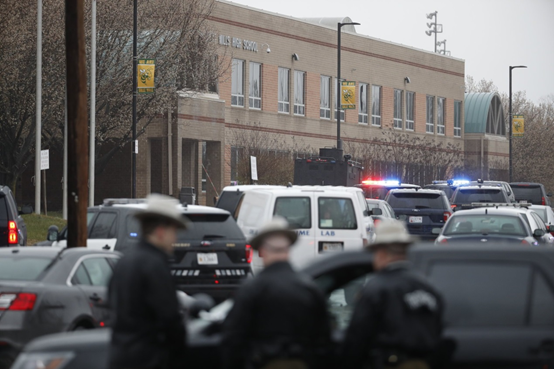 Washington (People’s Daily) – A student shot and critically wounded two others at Great Mills High School in Maryland, on Tuesday, before he was stopped by a school officer, according to St. Mary’s County Sheriff’s Office.

The gunman who remains unidentified, and whose age was not disclosed, was confronted in a hallway.  It remains unclear whether he died because of a shooting by the officer or of his own rounds.

The shooter and two students were rushed to the hospital with critical wounds, and the officer was not injured, according to the reports.

A male student, 14, is in stable condition while the female student, 16, remains in grave condition, according to Tim Cameron, the St. Mary's County Sheriff.  The shooter was pronounced dead at 10:41 a.m., Cameron said.

Great Mills High School is in Maryland, about 70 miles south of Washington, D.C. It houses more than 1,500 students, and boasts a graduation rate of 91%, based on the school's 2015-16 improvement plan.

After the incident, the school issued a statement, describing the shooting as “tragic” and urged parents and students to keep away as the school was under lockdown. Nathan Freese, a student at Great Mills, said the school held drills a couple of times for this type of situation." I didn't really expect this to happen. I always feel safe though because they always have police at the school," he added.

According to CNN, this marks the 17th such shooting in the United States since January 1 of this year. Maryland Governor Larry Hogan said the shooting was a "call to action" to address school safety.

Students across the US are calling for active gun control, as revealed by Saturday’s March For Our Lives rally in the nation’s capital against gun violence in schools.

This shooting comes in the wake of nationwide pressure lawmakers are facing to act against gun violence following the Valentine’s Day killings of 17 people in Florida by a teenager with an assault rifle.