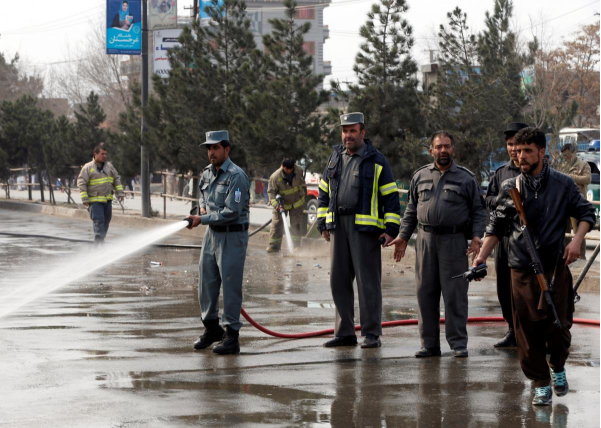 Afghan fire fighters clean the site of a suicide bomb attack near a Shi'ite mosque in Kabul, Afghanistan March 9, 2018. (Photo:Reuters)

A suicide bomber blew himself up in the Afghan capital on Friday, killing at least seven people in an attack on a crowd gathered to commemorate a political leader from the mainly Shi’ite Hazara minority, officials said.

One policeman and six civilians were killed and 15 civilians wounded when the bomber was stopped at a security checkpoint in the Mosalla-e Mazar area of Kabul, said Najib Danesh, an interior ministry spokesman.

There was some doubt about the toll, which some witnesses said was higher than the official figure. Shah Shir Azara, a security marshal at the site, said 13 people had been killed.

The bomber appeared to have intended to attack a crowd gathered to mark the anniversary of the killing of Hazara political leader Abdul Ali Mazari by the Taliban in 1995, but he was stopped before reaching the main gathering.

Islamic State claimed responsibility. It has done so for several attacks on Shi’ite mosques and Hazara gatherings over the past two years.

Little is known about the group and its capacity to conduct sophisticated attacks remains disputed, with many Afghan and Western security officials saying they doubt it works alone.

Afghanistan, a mainly Sunni Muslim country, has not seen the level of sectarian violence common in Iraq, but the attacks have fueled increasing anger among the Shi’ite Hazara, a group that has long faced discrimination.

In December, dozens of people were killed in a suicide attack on a Shi’ite cultural center claimed by Islamic State, and two months earlier two separate mosque attacks killed at least 72 people.

Friday’s attack came less than two weeks after President Ashraf Ghani called on the Taliban to join peace talks in a country which has been at war for decades.

The conflict kills thousands each year, with fighting continuing across large parts of the country and Kabul itself hit repeatedly by attacks.

On Thursday night, Taliban fighters attacked a joint army and police outpost in the northern province of Takhar, killing seven soldiers and 10 policemen, according to Khalil Aseer, a provincial police spokesman.

The Taliban said in a statement that 29 soldiers and police were killed in the attack, including four commanders.