The news report cited a source from the company, saying that the global sourcing program aims to meet upgraded demand in China’s domestic market while further building up its overseas supply chain for high quality brands.

The program will give more than 5,000 overseas brands access to the lucrative Chinese market in the next three years, the report said.

In 2017, Suning implemented its “smart retail” model, combining its processes for online and offline. The company’s strategy aims to fix weaknesses in commodity, logistics and after-sales services and to provide customized smart retail solutions in the cross-border e-commerce sector.

From 2010 to 2016, the market size of China’s cross-border e-commerce transactions soared from 1.3 trillion yuan ($205 billion) to 6.7 trillion yuan. In 2017, the figure continued to grow and reached 7.6 trillion yuan, according to data released by Suning Financial Research Institute.

In the government’s work report this year, creating a new landscape for opening-up was stressed. China’s market will expand the scope and level of opening-up by improving the mechanism for opening-up, pushing forward high quality development with a higher level of openess.

The government will actively expand imports and provide more options for consumers, the work report said. 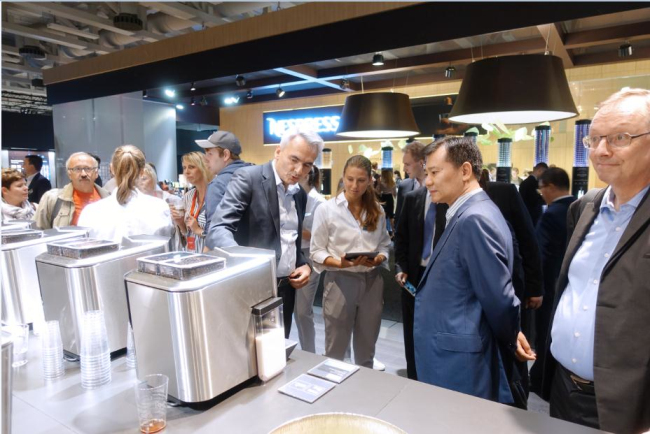 The Chinese Suning group is owned by commercial tycoon Zhang Jindong, who is well known for his leadership with hundreds of executives. The team has explored 147 countries and regions and more than 100 overseas bases for high quality commodities.

Zhang has done thorough due diligence checks in the US and Europe. In July 2017, he researched cold-chain logistics.

In September 2017, Zhang also traveled to Berlin for the IFA consumer-electronics trade show, observing cutting-edge technology such as big data, cloud computing and the Internet of Things.

Suning has over 1,500 technology-driven stores among almost 4,000 bricks-and-mortar stores throughout more than 600 cities in China and overseas.