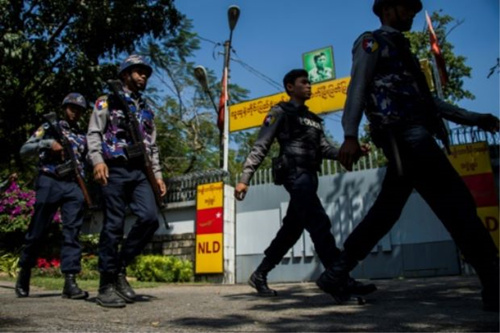 Police officers patrol in front of the residence of Myanmar's leader Aung San Suu Kyi in Yangon earlier this week after a petrol bomb was hurled into the compound. (Photo: Yahoo)

Yangon, February 3 - Myanmar police say they have arrested a mentally ill man who confessed to tossing a petrol bomb into the Yangon compound of de facto leader Aung San Suu Kyi this week.

Suu Kyi was not home when the crude bomb landed inside the gate of her lakeside villa on Thursday, causing little damage other than a fire that burned a water pipe.

But the incident unnerved supporters of the Nobel laureate, who championed Myanmar's democratic transition but has suffered a fallout with the international community over her failure to condemn army abuses against Rohingya Muslims.

Using photos taken by a witness of the attack, officers arrested Win Naing, 48, in the early hours of Friday, according to a report posted on Yangon police's official Facebook page.

"He confessed that he took a bottle filled with petrol...and threw it into the compound," the report said, adding that Win Naing does a security job for a construction company.

Police said they believe Win Naing has "mental health problems" but will continue to take legal action against him.

He told officers that he was motivated to throw the bomb because he had been "cursed by magic", the police report said.

Suu Kyi has not commented on the incident, which took place almost exactly one year after the assassination of one of her top legal advisors Ko Ni.

Ko Ni, one of few Muslims to hold a prominent government position in mainly Buddhist Myanmar, was shot in the head as he waited outside Yangon airport while holding his grandson.

The murder horrified the Muslim community and the ruling party in particular in a country where political assassinations are rare.