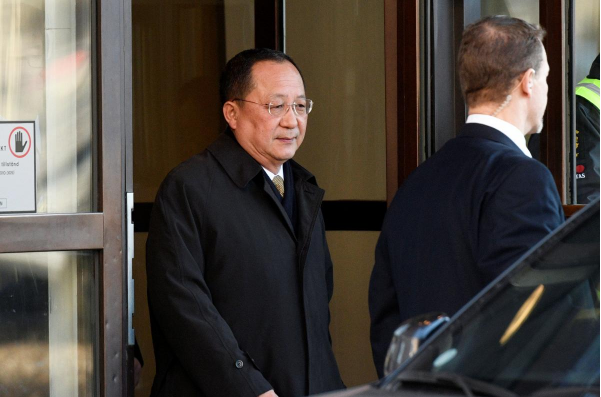 North Korean and Swedish foreign ministers ended three days of talks on Saturday on the security situation on the Korean peninsula which may help prepare the way for a planned meeting between U.S. President Donald Trump and Kim Jong Un.

North Korea’s Ri Yong Ho arrived in Stockholm on Thursday for talks with his Swedish counterpart Margot Wallstrom amid a flurry of diplomatic activity concerning the reclusive country and its nuclear ambitions.

Trump reaffirmed on Friday that he was willing to meet Kim after South Korean officials passed on an invitation earlier this month. North Korea has so far not publicly acknowledged the invitation.

“The foreign ministers discussed opportunities and challenges for continued diplomatic efforts to reach a peaceful solution to the conflict as well as bilateral relations,” the Swedish foreign ministry said in a statement after Ri and Wallstrom wound up their talks.

“Sweden underlined the need for North Korea to dismantle its nuclear arms and missiles program in line with several Security Council resolutions.”

The talks in Stockholm had initially been scheduled to conclude on Friday but were extended into the weekend.

“The dialogue has been constructive,” a source with knowledge of the discussions said. “It should be seen as a positive sign that the meeting was extended (until Saturday).”

Sweden is one of a handful of countries considered a possible venue for a meeting between Trump and Kim, who have engaged in bellicose mudslinging over North Korea and its nuclear arms program.

The Nordic country acts as diplomatic representative in North Korea for the United States, and has previously helped with the release of U.S. citizens held by North Korea.