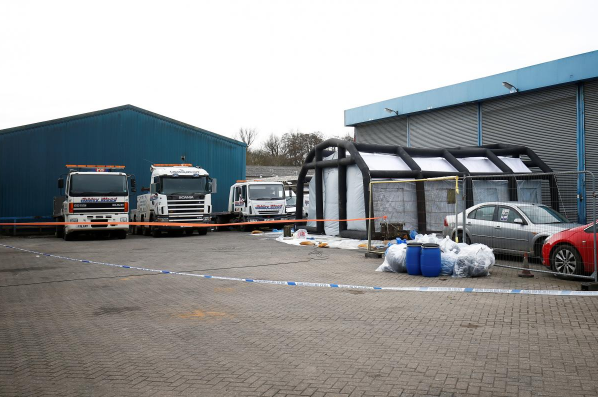 Police tape and bagged items are seen near an inflatable structure in the courtyard of Ashley Wood Recovery, where emergency services worked following the poisoning of former Russian intelligence officer Sergei Skripal and his daughter Yulia, in Salisbury, Britain March 14, 2018. (Photo: Reuters)

Swedish Foreign Minister Margot Wallstrom rejected Russian claims on Saturday that the country could be the source of a nerve toxin used against a former Russian double agent and his daughter in Britain, calling them “unacceptable and unfounded”.

A Russian foreign ministry spokeswoman told the Rossiya 24 TV channel earlier on Saturday that the most likely source of the Novichok nerve agent was Britain itself or the Czech Republic, Slovakia, the United States or Sweden.

“Forcefully reject unacceptable and unfounded allegation by Russian MFA spokesperson that nerve agent used in Salisbury might originate in Sweden,” Wallstrom said in a tweet.

“Russia should answer UK questions instead.”