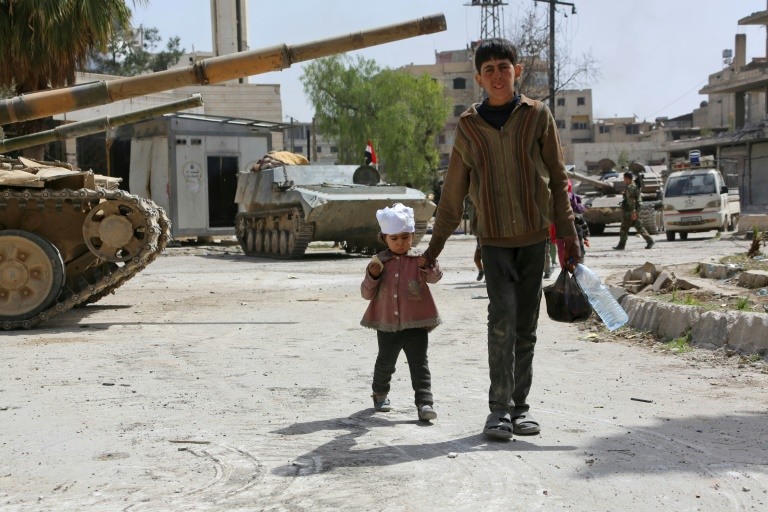 Civilians walk past Syrian army tanks on the main square of the Eastern Ghouta town of Kfar Batna on March 19, 2018 following its recapture from rebel fighters (Photo: AFP)

Syrian regime and allied forces battled to suppress the last pockets of resistance in and around Damascus Tuesday, while the beleaguered Kurds in the north braced for further Turkish advances.

The simultaneous assaults have sparked one of the worst humanitarian emergencies since the start of the Syrian conflict seven years ago, with aid groups struggling to gain access to the masses of displaced civilians.

Washington has voiced concern that the chaos in Syria could allow a revival of the Islamic State group, whose "caliphate" collapsed late last year after three years of international military operations.

The jihadists launched a surprise nighttime attack in a southern neighbourhood of Damascus, moving into the vacuum left by a deal that saw a rival armed group pull out exactly a week ago.

"IS took full control of Qadam, and 36 government troops and loyalist fighters have been killed," reported the Syrian Observatory for Human Rights.

There was no immediate comment from the regime, nor could the Britain-based monitoring group provide casualty figures for the jihadists.

Observatory chief Rami Abdel Rahman said the regime was sending reinforcements to retake Qadam, which was attacked from the adjacent IS-controlled neighbourhood of Hajar al-Aswad.

The jihadists also have a presence in the nearby Palestinian refugee camp of Yarmuk.

Syrian President Bashar al-Assad has brought swathes of territory back under his control, with help from Russia and allied forces, including Iran-backed Lebanese Hezbollah militia. 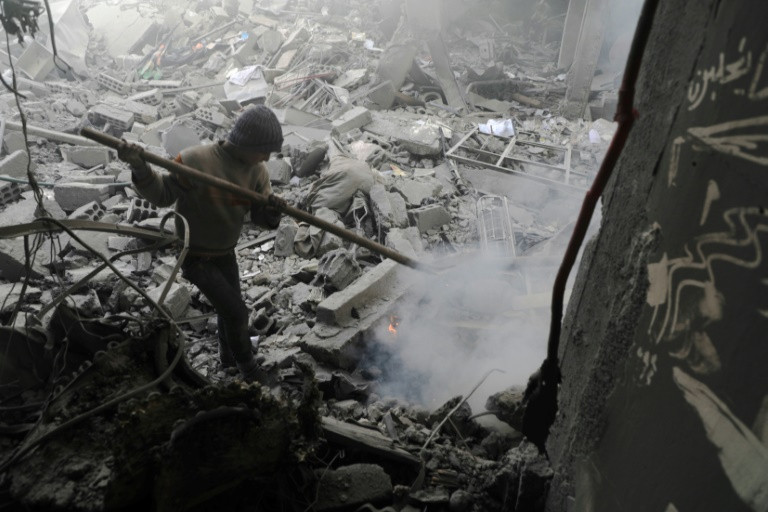 A Syrian boy tries to put out a fire in the rubble of buildings in the rebel-held town of Eastern Ghouta flattened by air strikes on March 19, 2018 (Photo: AFP)

He has recently focused efforts on flushing out the last pockets that escape government control in and around the capital, the largest of them being Eastern Ghouta.

Regime and allied forces have retaken more than 80 percent of the enclave and splintered its rump into three pockets, each controlled by different rebel groups.

One area includes the largest town of Douma, where an AFP correspondent reported heavy bombardment through the night that left ambulances struggling to reach the wounded.

At the town's main hospital, exhausted staff worked on extracting a shard of wood from the head of a 10-year-old girl.

A man walked the facility's halls with a sack. Medics said it held the human remains of a loved one killed in raids.

A trickle of medical evacuations was expected to take place Tuesday for the seventh straight day.

Tens of thousands of civilians have fled both the intense bombardment of Ghouta and the deprivations of a siege that lasted five years.

"The siege of Eastern Ghouta by the Syrian Government forces, half a decade long, has involved pervasive war crimes, the use of chemical weaponry, enforced starvation as a weapon of warfare, and the denial of essential and life-saving aid -- culminating in the current relentless, month-long bombardment of hundreds of thousands of terrified, trapped civilians," Hussein said Monday.

But he also warned of another humanitarian catastrophe unfolding hundreds of kilometres (miles) to the north in the Syrian border enclave of Afrin.

The Turkish army and its Syrian proxies -- a motley assortment of jihadists, former rebels and members of other armed groups -- seized Afrin from Kurdish forces on Sunday.

Turkish military police deployed across the city on Tuesday, as some civilians tried to return to homes and shops looted by Ankara's Syrian proxies.

The two-month offensive displaced around 100,000 people, most of them to the town of Tal Rifaat further east, the UN has said. 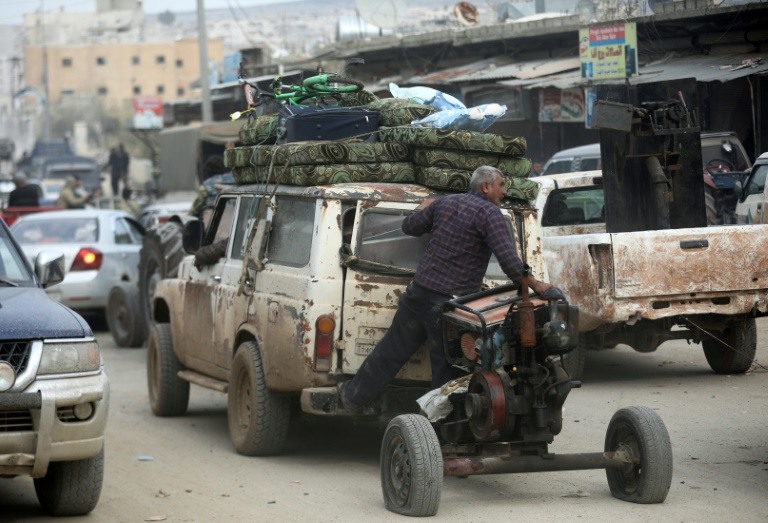 Civilians flee the Syrian Kurdish city of Afrin any way they can as Turkish troops and their Syrian Arab allies overrun it on March 18, 2018 (Photo: AFP)

On Tuesday, a convoy carrying food, blankets, and other aid was being delivered to thousands of families seeking refuge in Tal Rifaat, according to the International Committee of the Red Cross.

The capture of Afrin, one the cantons in the self-proclaimed autonomous administration run by Syria's Kurds, has been a huge blow to the minority.

Resentment runs high among the Kurds over the lack of Western support for their fighters, who spearheaded the US-led coalition's efforts against IS for more than three years.

The People's Protection Units (YPG) Kurdish militia redeployed some of its units from desert areas in the east where they had been battling remnant jihadists to join the defence of Afrin.

US State Department spokeswoman Heather Nauert said the Afrin battle had distracted from the fight against IS, which she said had begun "reconstituting in some areas".

"This is a serious and growing concern," she warned on Monday.