President Bashar al-Assad told his Iranian counterpart Hassan Rouhani that a U.S.-led attack on Saturday would increase Syria’s resolve to “fight and crush terrorism in every inch” of the country, the Syrian presidency said. 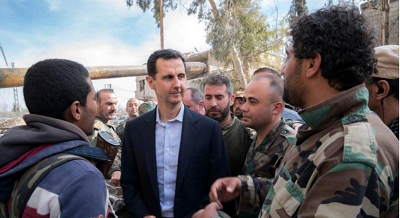 Rouhani told Assad that Iran would continue to stand by Syria, “expressing his confidence that this aggression would not weaken the determination of the Syrian people in its war against terrorism”.

Iran’s Supreme Leader Ayatollah Ali Khamenei said an attack on Syria by the United States, France and Britain on Saturday was a crime and would not achieve any gains.

“Today’s dawn attack on Syria is a crime. I clearly declare that the president of the United States, the president of France and the British prime minister are criminals,” Khamenei said in a speech, according to his Twitter account.

“They will not benefit (from the attack) as they went to Iraq, Syria and Afghanistan in the past years and committed such crimes and did not gain any benefits,” Khamenei said.

“These attacks will stabilize the Syrian government... and unite the different tribes in Syria as Syrians become aware of their honor and come to the defense of the independence, territorial integrity and the government of their country,” Sheikholeslam said.