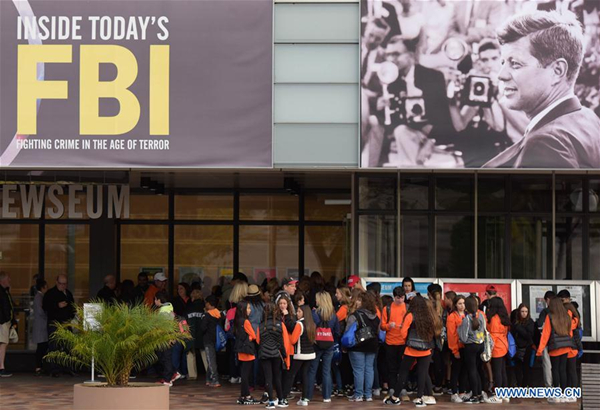 Visitors line under a poster of former U.S. President John F. Kennedy to enter the Newseum in Washington D.C., the United States, on Oct. 26, 2017. Photo：Xinhua

In a memo issued on October 26, Trump directed the heads of executive departments and agencies to release the documents, save some redacted documents undergoing a further six-month review.

This latest move has been long expected. On October 21, Trump said in his tweet that he would be releasing the JFK files “subject to the receipt of further information.” Trump said in the memo that “The American public expects -- and deserves -- its government to provide as much access as possible to President John F. Kennedy Assassination Records (records) so that the people may finally be fully informed about all aspects of this pivotal event.  Therefore, I am ordering today that the veil finally be lifted.”

Explaining the decision to withhold some redacted records, Trump said that “executive departments and agencies have proposed to me that certain information should continue to be redacted because of national security, law enforcement, and foreign affairs concerns. I have no choice -- today -- but to accept those redactions rather than allow potentially irreversible harm to our nation's security.”

President Kennedy was fatally shot in Dallas, Texas 54 years ago. Lee Harvey Oswald was arrested and charged with killing Kennedy, but he denied this. On November 24, 1963, Oswald was shot dead in the basement of the Dallas police department by Jack Ruby, a local nightclub owner.

Conspiracy theories have been prevalent since the assassination. Some people suggest there may have been a second shooter, while others say it is more likely the fatal shot came from in front of Kennedy and not behind. The New York Times reported that the newly released documents “were a treasure trove for investigators, historians and conspiracy theorists who have spent half a century searching for clues to what really happened in Dallas on that fateful day in 1963.”

However, of the 2,891 documents released Thursday, only 53 had never been disclosed by the archives; the rest have been made public with redactions. When the US Congress passed the JFK Assassination Records Collection Act in 1992, US federal government agencies transferred assassination-related records to the National Archives which established the JFK Assassination Records Collection. The collection consists of approximately five million pages of records. Approximately 88% of the records in the collection have been opened. An additional 11% have been released in part with sensitive portions removed. Approximately 1% of documents identified as assassination-related remain withheld in full.

According to the JFK Act, all records previously withheld either in part or in full should be released on October 26, 2017, unless authorized for further withholding by the President of the United States.

A spokesperson for the CIA said the agency welcomes the president's directive to further review the records to identify any additional information that can be released. But media has long reported that there was lobbying from various federal agencies, including the CIA and the FBI, askingTrump to wait on releasing some of the JFK documents. CBS reported that there is concern within these agencies that the documents might reveal sources and operations from the near past related to current people or operations.

According to the CIA spokesman, every single one of the remaining roughly 18,000 CIA records will ultimately be released, with no document withheld in full. The CIA wants to protect the identity of CIA assets and current and former CIA officers, as well as intelligence methods and partnerships that are still relevant.

The BBC has quoted White House officials as saying that Trump was reluctant to agree to agency requests to hold the remaining documents. In an October 26 memo, Trump ordered agencies to re-review their proposed redactions and only redact information in the rarest of circumstances where its withholding “is made necessary by an identifiable harm to military defense, intelligence operations, law enforcement, or conduct of foreign relations; and the identifiable harm is of such gravity that it outweighs the public interest in disclosure.” These instructions will allow the National Archives to release as much information as possible by the end of the temporary certification period on April 26, 2018.