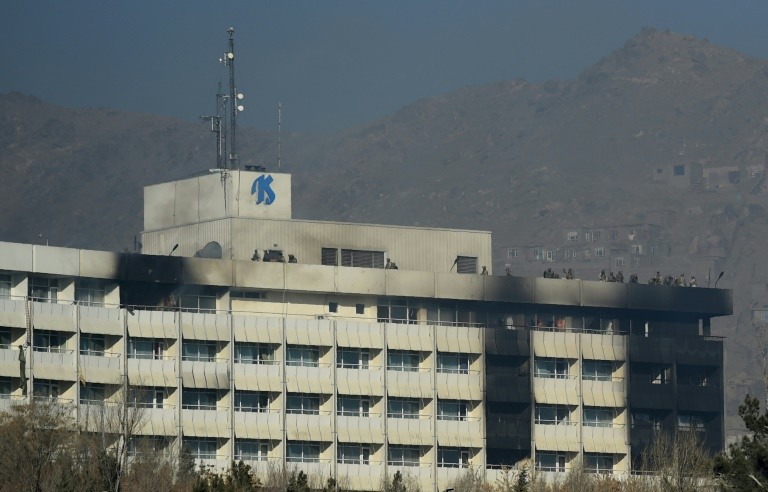 The death toll from an hours-long Taliban assault on a hotel now stands at 22, including a number of foreigners. Photo: AFP

Taliban militants who killed at least 22 people at a luxury Kabul hotel went from room to room searching for foreigners, survivors and a security source said Monday as more details of the victims emerged.

Insurgents armed with Kalashnikovs and suicide vests attacked the landmark Intercontinental Hotel overlooking the Afghan capital late Saturday, in an assault that lasted more than 12 hours and prompted questions over how the attackers breached security.

Guests hid behind pillars and in rooms as gunmen sprayed bullets and set fire to parts of the six-storey building. Some people climbed over balconies and used bed sheets in a desperate attempt to escape.

"They were saying, 'Kill the foreigners!'," a 20-year-old hotel employee who gave his name as Hasibullah told AFP from his hospital bed.

He described hiding and listening as the gunmen went from room to room, forcing doors open "with daggers" and killing those inside.

Officials have said at least 14 foreigners were killed.

"They didn't want to kill the Afghans," a security source told AFP. "The weapons and bullets they had were for the foreigners."

Another witness claimed he had seen the militants beheading guests.

The attack ended Sunday with all six militants killed by Afghan forces, aided by Norwegian troops.

Health ministry spokesman Waheed Majroh said 22 bodies had been taken to Kabul hospitals. "Some of the bodies (are) burned badly and need DNA tests to be identified," he said.

The interior ministry gave a lower toll Monday, saying 19 people were dead. There were also conflicting accounts of the number of attackers, which the ministry had put at six.

Authorities are known to understate death tolls in high-profile attacks, and much higher figures were circulating on local media.

At least seven Ukrainians were among the dead, the country's ambassador to Tajikistan and Afghanistan Viktor Nikitiuk told Ukrainian television 112.

"All the dead were working for the airline Kam Air and living at the Intercontinental Hotel," he said.

One German citizen and one Kazakh citizen were also killed, their foreign ministries said.

The employee Hasibullah said he saw two "fashionably dressed" gunmen in the hotel restaurant before the assault began.

The security source confirmed investigators had seen CCTV footage showing the attackers in the restaurant prior to the assault.

"It was around 8.30 pm... They were sitting in the corner of the hotel and they immediately started spraying bullets," Hasibullah said.

He ran to the fifth floor and locked himself inside a room, though not before seeing "many" bodies on the ground.

But as the gunmen went from door to door he leapt from the window in terror. "I fell on people lying in blood... it was horrific."

Knocked unconscious, he awoke in hospital with a broken leg and other wounds.

Another survivor told AFP the attackers "even beheaded the guests and people inside the hotel".

Noorullah, 24, said he worked at the hotel checking its security cameras, but fled to the fourth floor as the power went off and the attack began.

Also describing the militants as wearing civilian clothes, he said they killed "dozens" of people, opening each room and "raining" bullets.

He, too, jumped from a window to escape.

Witnesses said the hotel's security staff fled the scene as the attack unfolded, though a second security source denied the claim.

Authorities warned they were still investigating how militants breached hotel security, which was taken over by a private company three weeks ago.

A security source said the company involved, KBBS, has responsibility for protecting the complex only, with its 150 guards not allowed inside the hotel under a contract he said had been signed by Afghan president Ashraf Ghani.

They were also not allowed to search VIPs entering the hotel, he said.

The company's website shows it has provided security services to other embassies as well as the United Nations and the European Union.

"They are screened and they are highly trained, they are more professional than the police," the source told AFP on condition of anonymity.

It was too soon to say if the militants had inside help, an interior ministry spokesman told AFP.

The attack followed security warnings in recent days to avoid hotels and other locations frequented by foreigners in war-torn Kabul.