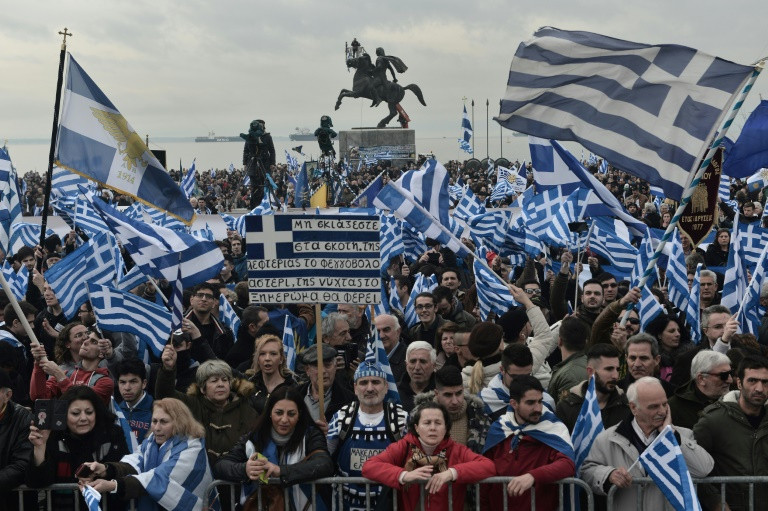 More than 90,000 people joined the protest in Thessaloniki against the use of the name Macedonia by Greece's neighbour. Photo: AFP

Tens of thousands of people took to the streets of northern Greece's biggest city Thessaloniki on Sunday, police said, in a long-running row between Athens and Skopje over the use of the name Macedonia.

Athens argues that the name Macedonia suggests that Skopje has territorial claims to the northern Greek region of the same name, of which Thessaloniki is the capital.

The region was the centre of Alexander the Great's ancient kingdom, a source of Greek pride.

Protest leaders said at least 400,000 people had turned up.

"We estimate there were at least 400.000 people. It is impressive," rally organiser Anastasios Porgialidis told AFP. 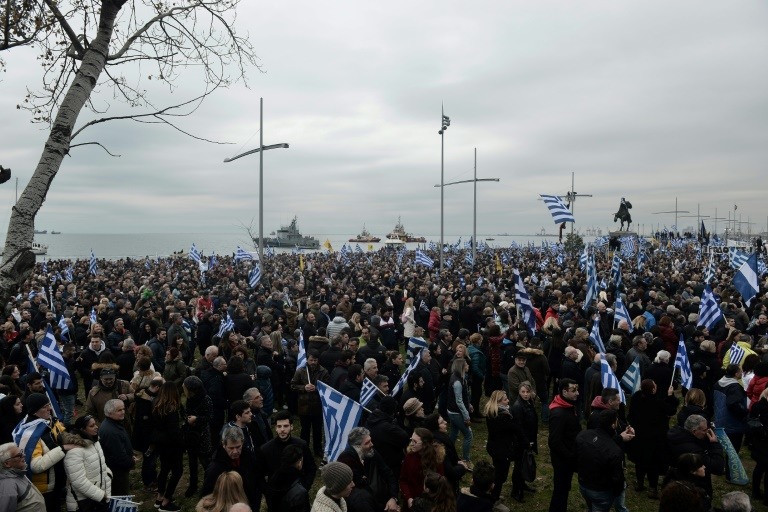 Rally organisers claimed at least 400,000 had turned up for the demonstration, which included members of the neo-Nazi Golden Dawn party. Photo: AFP

Some minor scuffles erupted between the protesters and anarchists who had organised a counter-demonstrators, prompting police to intervene with tear gas.

The rally drew members of the neo-Nazi Golden Dawn party who had gathered around the statue of Alexander the Great along with local clergy.

Representatives from the main opposition party, New Democracy, were also present despite a tacit order from its liberal-minded leader Kyriakos Mitsotakis to boycott the protests.

Cretans in traditional costumes who travelled from the southern island with their horses, as well as people from northern Greece wearing costumes from the Macedonian wars era a century ago, crowded at the White Tower on the Thessaloniki waterfront from early in the morning.

Police said 284 buses had transported people from around Greece to the port city.

Greece and Macedonia returned to the United Nations last week hoping to reach a compromise that could end the 27-year dispute over the former Yugoslav republic's name.

Greece's objections to the use of the name Macedonia since the Balkan country's independence in 1991 have hampered the tiny nation's bid to join the European Union and NATO.

"We want to warn our politicians not to dare to betray us. Macedonia is Greek and this is not negotiable", said protester Dimitris Triantafillidis, 50, a shop owner from the northern regional district of Pieria. 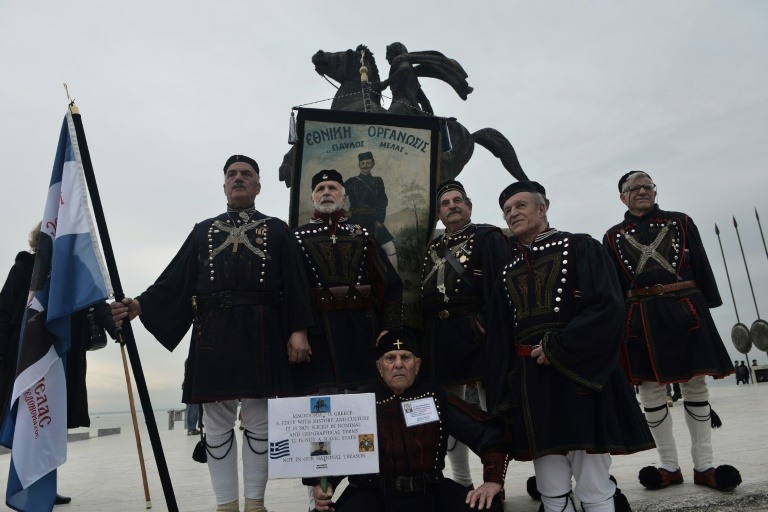 Greeks and Cretans wearing traditional costumes turned up for the rally in the port of Thessaloniki. Photo: AFP

The UN negotiator Matthew Nimetz -- a 24-year veteran on the issue -- said last week that he was "very hopeful" that a solution was within reach.

Despite the nationalist fervour that is also being fed by Golden Dawn, Greeks appear to be less militant on the issue than in the past.

In 1992, more than one million people -- 10 percent of the population -- joined a rally in Thessaloniki to proclaim that "Macedonia is Greek".

According to a survey conducted for Greek radio station 24/7 by the Alco polling group, 63 percent of respondents said they thought it was in Greece's best interests to seek a mutually acceptable solution at the UN talks.

And the Greek Orthodox Church, which is traditionally opposed to the use of the term Macedonia from Skopje and led the 1992 rally, appears to have distanced itself from Sunday's events.

Tsipras, who is expected to meet with his Macedonian counterpart Zoran Zaev in Davos next week, said in an interview published on Sunday: "If there is an opportunity for a solution, it would be a national stupidity not to make good use of it."

However, he told Ethnos newspaper that he could understand "the concerns and sensitivities" of the Greeks of the north.

Macedonia is known as the Former Yugoslav Republic of Macedonia (FYROM) at the United Nations, although the Security Council acknowledged this was a provisional name when it agreed to membership.

If a deal is reached at the UN talks, it will be put before Greek parliament for approval, with the government expecting the compromise name to be approved despite opposition within some parties.

According to Macedonian media, Nimetz has proposed five alternatives all containing the name.