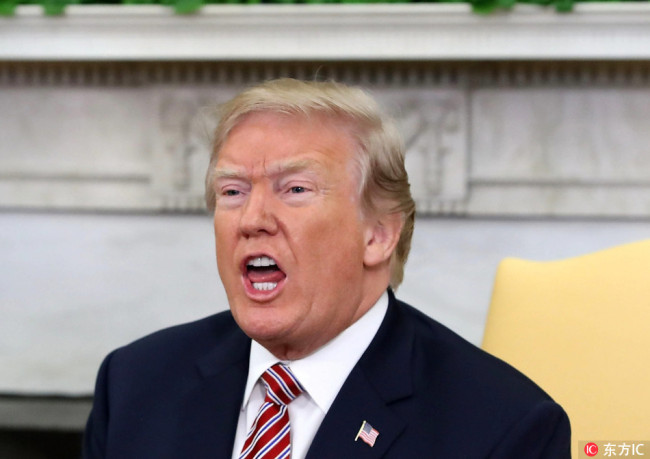 Washington (People’s Daily) - US President Donald Trump sent another confusing message on Thursday morning that “Never said when an attack on Syria would take place. Could be very soon or not so soon at all", as he has threatened missile strikes in response to a suspected poison gas attack a day earlier that American missiles “will be coming, nice and new and ‘smart’”.

White House press secretary Sarah Sanders said in a statement that “We are continuing to assess intelligence and are engaged in conversations with our partners and allies,” as Trump and his national security team are still weighing possible options for Syria and there’s no decision on an attack yet.

Trump talked with the UK Prime Minister Theresa May and French President Emmanuel Macron on Thursday night, the two main partners poised to support any military response to the alleged chemical attack.

US Defense Secretary Jim Mattis told the country’s House Armed Services Committee that retaliation towards Syria had to be balanced against the threat of a wider war in a hearing on Thursday morning.

The Pentagon has mounting concerns that a concerted bombing campaign could escalate into a broader conflict between Russia, Iran and the West.

Mattis urges caution and consideration towards a more comprehensive strategy.

It has not yet been confirmed by the Trump administration that the Syrian regime has used chemical weapons.