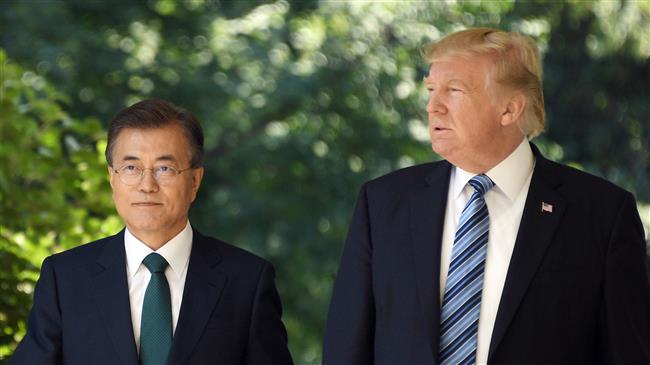 "Just had a long and very good talk with President Moon of South Korea. Things are going very well, time and location of meeting with North Korea is being set," Trump wrote on Twitter.

"Also spoke to Prime Minister (Shinzo) Abe of Japan to inform him of the ongoing negotiations," he wrote.

Moon met with Kim in a historic summit, agreeing on Friday to pursue a permanent peace and the complete denuclearization of the Korean Peninsula.

An armistice brought the fighting on the Korean Peninsula to an end in 1953, but 65 years later, a final peace agreement has still not been reached.

A later readout of the Trump-Moon call issued by the White House said the US and South Korea had closely coordinated ahead of Moon's meeting with Kim.

It added that Trump and Moon "agreed that the unprecedented pressure applied by the United States, the Republic of Korea, and the international community through the global Maximum Pressure Campaign has led to this significant moment."

A readout of Trump's call with Abe said the leaders "reiterated the need for North Korea to abandon all weapons of mass destruction and ballistic missile programs" and that Trump noted "he will urge North Korea to promptly resolve its abductions of Japanese citizens."

"Secretary Mattis reaffirmed the ironclad US commitment to defend (South Korea) using the full spectrum of US capabilities," it said.

The Moon-Kim meeting has raised expectations for Trump's own planned summit with the North Korean leader, the date and location of which have not yet been finalized.

Mongolia and Singapore are the final two sites under consideration for the summit, CBS News reported, though Singapore's Prime Minister Lee Hsien Loong said Saturday that there had been no formal request for his city-state to host the meeting.

Last year, Pyongyang carried out its sixth nuclear test, by far its most powerful to date, and launched missiles capable of reaching the US mainland.

Its actions sent tensions soaring as Kim and Trump traded personal insults and threats of war.

Trump has demanded the North give up its weapons, and Washington is pressing for it to do so in a complete, verifiable and irreversible way.