HEADLINE Thousands of Palestinians protest at Gaza-Israel border, one dead

Thousands of Palestinians protest at Gaza-Israel border, one dead 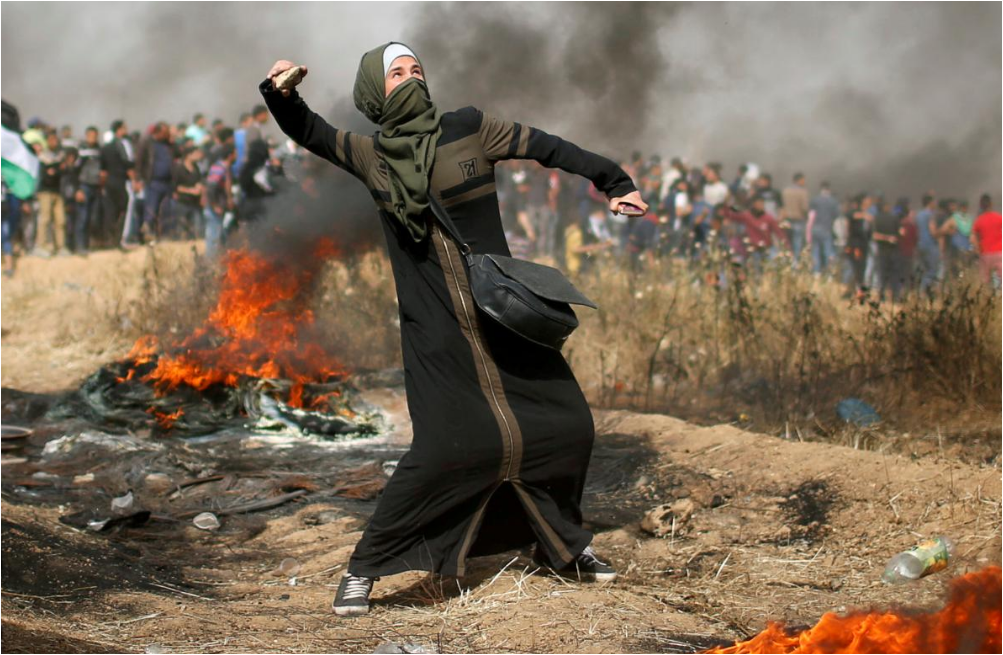 A girl hurls stones during clashes with Israeli troops at a protest where Palestinians demand the right to return to their homeland, at the Israel-Gaza border, east of Gaza City, April 13, 2018. (Photo: Reuters)

A Palestinian was killed and more than 200 others wounded during clashes with Israeli troops as thousands gathered in protest along the Gaza-Israel border on Friday, Gaza officials said.

Palestinians hurled stones and burning tyres near the frontier fence, where Israeli army sharpshooters are deployed. Some in the crowd threw firebombs and an explosive device and tried cross into Israel, according to the Israeli military.

An Israeli military spokesman said troops were being confronted by rioters and responded “with riot dispersal means while also firing in accordance with the rules of engagement”.

Palestinians had arrived en masse at tented camps near the frontier as a protest dubbed “The Great March of Return” - evoking a longtime call for refugees to regain ancestral homes in what is now Israel - moved into its third week.

Israeli troops have shot dead 31 Gaza Palestinians and wounded hundreds since the protests began, drawing international criticism of the lethal tactics used against them.

On Friday, groups of youths waved Palestinian flags and burnt hundreds of tyres and Israeli flags near the fenced-off border after Friday prayers. At one camp east of Gaza City, youths carried on their shoulders a coffin wrapped in an Israeli flag bearing the words “The End of Israel”.

Israel has declared a no-go zone close to the Gaza border fence.

No Israelis have been killed during the demonstrations, and human rights groups say the Israeli military has used live fire against demonstrators who pose no immediate threat to life.

Israel says it is doing what it must to defend its border, and to stop any of the protesters getting across the fence.

The planned six-week protest has revived a longstanding demand for the right of return of Palestinian refugees to towns and villages from which their families fled, or were driven out, when the state of Israel was created 70 years ago.

The protest began on March 30, and is expected to culminate on May 15.

That is the day Palestinians will mark the 70th anniversary of the “Nakba” or “Catastrophe”, when hundreds of thousands of Palestinians were displaced amid violence culminating in war between newly created Israel and its Arab neighbors in May 1948.

Successive Israeli governments have ruled out any right of return, fearing the country would lose its Jewish majority.

“Some people believe we are idiots to think the Israelis will allow us in, they may not, but we will not stop trying to return,” said a protester, 37-year-old civil servant Ahmed, as he stood on a hilltop overlooking the Israeli fence.

Like most of the 2 million Palestinians packed into the tiny, impoverished Gaza Strip, Ahmed is a descendant of refugees from Jaffa, a coastal town in Israel just south of Tel Aviv.

“No peace, no jobs, no unity and no future, so what difference would death make? If we are going to die, then let it not be in vain,” said Ahmed, who refused to give his full name, fearing Israeli reprisals.

The Israeli government accuses Hamas, the Islamist movement that has ruled Gaza largely since Israeli soldiers and settlers withdrew in 2005, of having instigated the protests and of using them as cover to launch attacks.

“Israel will continue to defend its borders and its citizens. Your country would do the same,” an Israeli foreign ministry spokesman said on Twitter.

The Israeli military has displayed video footage in which the frontier fence is seen being cut and breached during the recent clashes, with, Israel says, explosives planted there to target its troops.