HEADLINE Thousands rally in US to tighten gun laws

Thousands rally in US to tighten gun laws

Washington (People’s Daily) - The Capitol in white was shadowed by hundreds of thousands of colorful posters under the blue sky. Protesters swarmed on Pennsylvania Avenue leading to the White House, crying out for an end to gun violence.

It is hard for them to forget 2018 Valentines’ day. A gunman killed 14 students and three staff at Marjory Stoneman Douglas High School in Florida. Only several weeks later, a 16-year-old girl who was wounded by an armed student at a high school in Maryland passed away.

History repeated itself. 146 mass shootings have taken place in the US from 1967 to 2018. Most of the shootings targeted children, students and adults.

Outraged by increasing school shootings, a great number of children and families took to the streets in Washington D.C. Saturday to demand legislative reforms to firearms laws. More than 800 protests were planned across the US the same day. People in other metropolises like New York, Boston, Los Angeles and Chicago also joined the march to let their voices be heard. 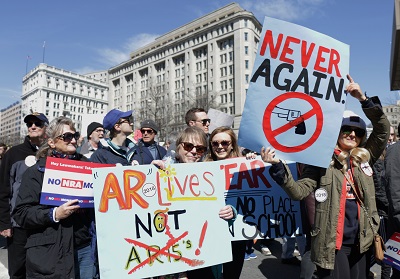 “Within three years when I was there, I saw people shot dead on school property and students killing other students,” Michael Zuschek, a retired high school teacher from Kansas, told People’s Daily as he recalled his terrible experience with gun violence.

According to its website, the rally called March For Our Lives was created by, inspired, and led by students across the country who will no longer risk their lives waiting for someone else to take action to stop the epidemic of mass school shootings that has become all too familiar. The mission and focus is to demand that a comprehensive and effective bill be immediately brought before Congress to address these gun issues.

Shamaria Bell, a 17-year-old high school student who participated in the march, said her aunts, cousins and friends who live in the southeast of D.C. have experienced gun violence many times. “More specific background checks are needed,” she said. “Overall, we should tighten our gun laws. I really hope the government could consider this.”

Some survivors of school mass shootings went on stage to share their feelings and thoughts on gun violence. A number of celebrities also showed up to express their support. 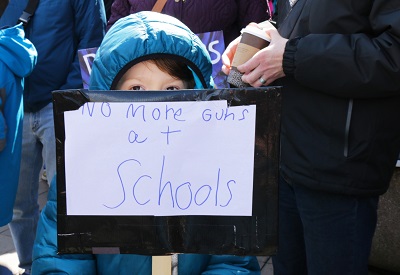 Marchers shouted out their appeals with elaborately made posters in their hands. Among them, many directly condemned the National Rifle Association (NRA) for manipulating the US Congress and imposing too much influence on politicians.

The NRA, an organization that advocates gun rights, is influential in America’s politics. During the 2016 presidential election, the NRA and its affiliates donated $54 million to the Republicans to help Donald Trump win the election, which has secured their control of the nation’s gun issues.

“The NRA gives money to the government, so the laws are difficult to change,” said Freddi Taylor, mother of a five-year-old boy. She told People’s Daily that people who are affected by gun violence are vulnerable groups like women and children. “The officials are not threatened by guns in their million-dollar houses and amazing neighborhoods,” she added.

“It is all about money! Big money controls things,” said Michael Zuschek. He further criticized the NRA as the representation of gun distributors and gun manufacturers, which in his perspective will not try to protect people’s lives. “Money is power in this country. It is not real democracy,” he said, revealing his disappointment. 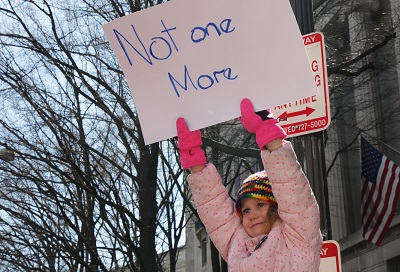 As rallies geared up across the US for the March of Our Lives, the White House said in a statement: “Keeping our children safe is a top priority of the president's, which is why he urged Congress to pass the Fix NICS and STOP School Violence Acts, and signed them into law.”

When talking about the changes, Taylor stayed uncertain on what March For Our Lives could bring, as she thinks laws may not get revised soon. “But our voices need to be heard,” she said. 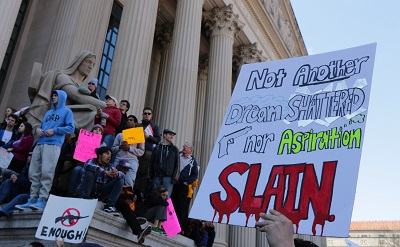 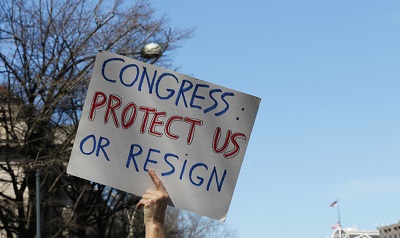