HEADLINE Tillerson says US troops in Syria to counter Assad

Tillerson says US troops in Syria to counter Assad 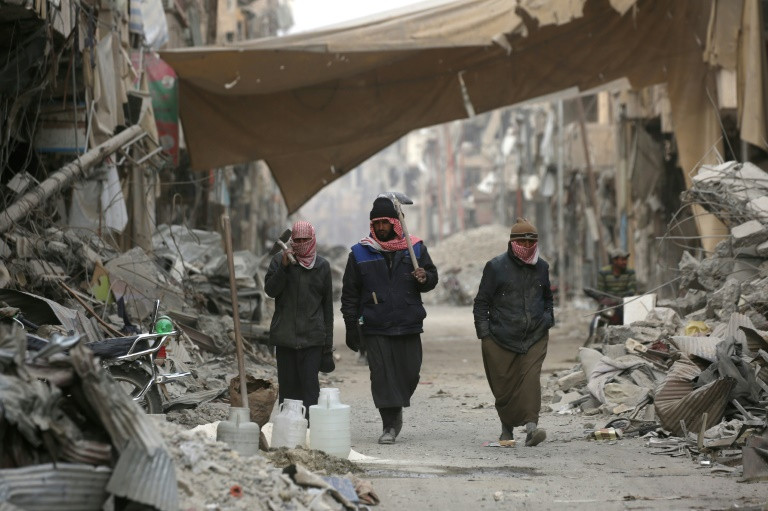 Three people walk amid the debris in the Syrian city of Raqa, after Kurdish fighters supported by US warplanes defeated Islamic State group jihadists to take the city. Photo: AFP

Secretary of State Rex Tillerson said Wednesday that US troops will remain in Syria not juts to fight jihadists but also to counter the power of Bashar al-Assad and his ally Iran.

In a speech on the US strategy to help end Syria's seven-year civil war, Tillerson stressed that the mission of the US military is to destroy the Islamic State group and prevent its return.

But he also made it clear that the open-ended deployment is intended to help create enough stability for Syrians to be able to remove Assad from office and reject Iranian influence.

"A total withdrawal of American personnel at this time would restore Assad to continue his brutal treatment against his own people," Tillerson told an audience at Stanford University.

"A murderer of his own people cannot generate the trust required for long-term stability," he said.

"A stable, unified, and independent Syria ultimately requires post-Assad leadership in order to be successful."

The United States has deployed around 2,000 ground troops to Syria and its warplanes patrol over the east of the country, hunting remnants of the Islamic State group.

The US works with the Syrian Democratic Forces, a militia dominated by Kurdish fighters which Washington sees as a basis for a 30,000-strong border force to hold eastern Syria.

Assad's Damascus regime has condemned this force as traitors, and US ally Turkey, wary of the presence of the YPG Kurdish militia in its ranks, is highly suspicious of its role.

Tillerson insisted that Washington is not being dragged into the Syrian civil war as a combatant seeking violent regime change, nor into a long-term nation-building mission.

Instead, he argued that the US role will provide stability to allow a UN-led peace process to resume and find a Syrian-led alternative to Assad's rule and the Iranian presence.

"The departure of Assad through the UN-led Geneva process will create the conditions for a durable peace within Syria and security along the borders," Tillerson said.

"US disengagement from Syria would provide Iran with the opportunity to further strengthen its own position in Syria.

"As we have seen from Iran's proxy wars and public announcements, Iran seeks dominance in the Middle East and the destruction of our ally Israel," he said.

Despite rejecting the regime change and nation-building model of past US interventions in the region, Tillerson said that the United States must not repeat its "mistake" in leaving Iraq.

US troops completed a withdrawal from Iraq in 2011, eight years after they toppled Saddam Hussein's rule, only to return in much lower numbers in 2014 to fight the Islamic State.

"The United States will maintain a military presence in Syria, focused on ensuring that ISIS cannot re-emerge," Tillerson said, using an abbreviation for the Islamic State group.

"We cannot make the same mistakes that were made in 2011, when a premature departure from Iraq allowed Al-Qaeda in Iraq to survive and eventually morph into ISIS," he said.